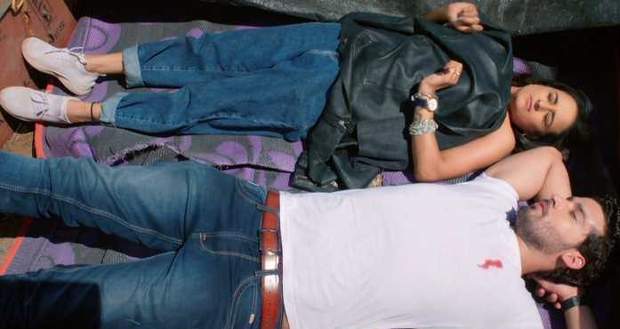 Meanwhile, Kamya explains to dadi that jewellery causes rashes on her.

Later at night, Kamya and Kabir argue over sleeping arrangements and Kabir ends up on the sofa. However, Kamya is surprised at Kabir's obedience and asks after his health.

Later, Kabir gets annoyed at Kamya’s inquisitions and leaves.

While in the garden, Kabir is trying to come to terms with Kamya’s past. Kabir feels Kamya’s pain and admires her braveness.

On the other hand, Sikander tortures the kidnapper for failing again. Sikander also gets into a fight with Arjun for losing Kabir while Suman stops them and advises Sikander to let Kamya go.

However, Sikander tells Suman that he is the killer, who Kamya has been searching for and now he has new plans for Kamya.

In the morning, Kamya is still trying to figure out Kabir’s weird behaviour since night.

Later, Sardarji reminds Kabir of Valentine's day. However, Kabir is now unsure of his feelings and asks Sardarji about love and his dilemma towards Kamya now that he knows of her past.

Afterward, Lovely brings Kamya to a Valentine's day party where Kamya shows her annoyance to Kabir for getting them stuck in this situation.

Unwillingly, Kamya and Kabir get dragged into the party’s game whereas Kabir shows indifference to Kamya.

Unusually, Kamya is nervous at being this close to Kabir.

During the games, Kabir and Kamya both realise some truths about each other.