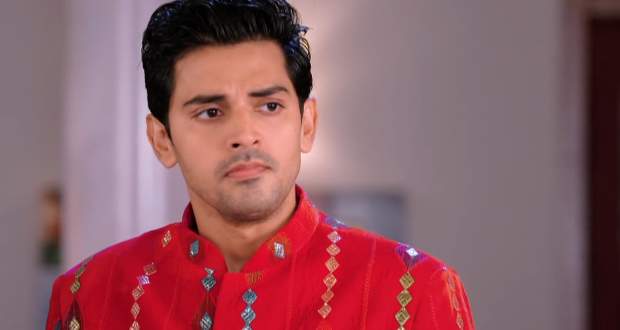 He asks no one to cross that line and also stops Jamna from interrupting him. Anant starts beating Sagar while Hema requests Jamna and Praful to stop him.

Praful states that Anant is not doing anything wrong and that Sagar should be punished. Hema requests someone to stop Anant while at the same time a girl enters Desai's house.

She holds Anant’s hand and stops him from beating Sagar. The girl’s name is Radhika and she reveals that she knows for so long but has never seen him this angry.

Hema accuses Anant of beating her brother. Kanak thanks Radhika and asks Sagar what he did with Gehna.

Sagar lies that he went into Anant’s room to check why Gehna went in his room. He accuses Gehna of stealing something from Anant’s room.

Tiya wants everyone to ask Gehna as well her side of the story. Gehna swears on the goddess that she didn’t steal anything while Praful trusts her.

Gehna states that Anant called her in his room while Anant says he didn’t call her. Gehna says Tanu told her that Anant is calling her.

Tanu reveals that truth and says that Sagar told her that Anant is calling Gehna. Gehna further states that Sagar has tried to take advantage of her before as well.

Radhika states that they should call the police to get Sagar arrested. Hema protests while Gehna also doesn’t want the police to arrive at Desai's house.

Anant asks Sagar to leave while Hema also wishes to leave the house. When nobody stops her, she states that she will take her kids along as well.

Upcoming Saath Nibhaana Saathiya 2 episode update: Anant asks for Gehna to get married to him.

© Copyright tellybest.com, 2020, 2021. All Rights Reserved. Unauthorized use and/or duplication of any material from tellybest.com without written permission is strictly prohibited.
Cached Saved on: Tuesday 8th of June 2021 03:46:23 PMCached Disp on: Wednesday 16th of June 2021 06:55:17 AM