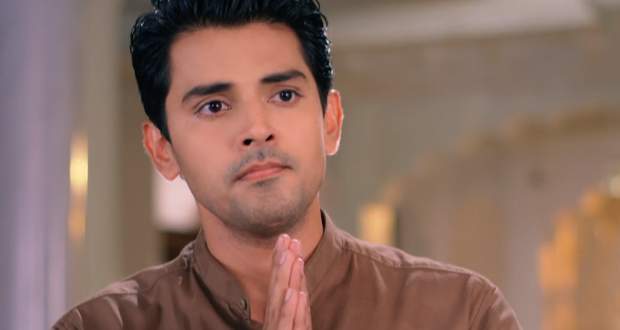 Anant states that old-fashioned thinking will not be good for Gehna. Radhika says Kanak was also supporting Mausi while Kanak tries to prove herself innocent.

Anant further says the alliance can’t be fixed as the boy can’t take Gehna along for two years abroad.

He further states that Gehna will have to stay with the boy’s mother in the village. He asks them to leave while Kanak tries to play innocent.

Anant takes full responsibility for Gehna’s marriage and decides to search for the groom himself.

Later, Hema mocks Kanak for her failed plan while Kanak gets angry and slaps her. Meanwhile, Anant brings Radhika to an agency to enquire about grooms for Gehna.

Radhika is happy that Anant takes care of Gehna but wants Anant to concentrate on her as well after Gehna’s wedding.

Hiral asks Hema to not instigate Kanak while they find her making food in the kitchen. Gehna tries to stop her but Kanak wants to repent for her mistakes.

Anant learns about a well-settled boy but the agent says he needs to do some more inquiries. Meanwhile, Kanak does the drama of being guilty in front of Jamna and Praful.

Praful says it is not Kanak’s fault and further gives her the responsibility of handling the finances of Gehna’s wedding.

Gehna remembers the harsh words of Kanak but still doesn’t say anything negative about Kanak.

Later, Anant returns home and reveals he has found a nice groom for Gehna. Anant also states that Gehna won’t do the work alone and everyone will do their own work.