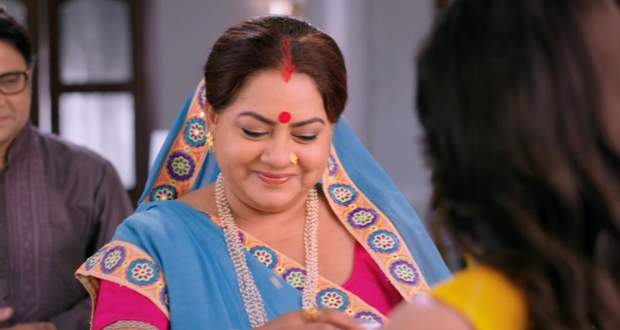 Today's Saath Nibhaana Saathiya 2 7 December 2020 episode starts with Baa and Bapuji telling Hiral to make the Prasad for the upcoming pooja and telling Hema to help her.

Baa surprises Radhika and Anant by giving her a gold chain and telling her to call her parents for their marriage alliance.

Gehna collides with Anant and is about to fall but Anant saves her.

Anant gives her the paper she dropped and praises her for caring about everybody.

Kanak holds the rejection letter of the marriage that she took and remembers how she changes the letters.

Kanak burns the paper and tells Hiral and Hema to make Khichadi for Gehna.

Baa gifts Gehna an expensive necklace while Hiral and Hema look for the burned paper.

Baa informs Gehna that before her marriage, she wants to do a ritual for Anant and Radhika's alliance.

Baa clicks a photo of them but accidentally crops Radhika out from the picture.

Radhika says that it's okay and Baa goes to show the picture to Bapuji.

Hema picks up the paper but drops it when she sees Tia coming.

Tia shows her and Hiral the necklace Baa gave Gehna and they get jealous.

They add chilli powder in the Khichadi and swear to make Gehna cry.

Baa tells Bapuji that she will give her Pushtaini necklace to Radhika.

© Copyright tellybest.com, 2020, 2021. All Rights Reserved. Unauthorized use and/or duplication of any material from tellybest.com without written permission is strictly prohibited.
Cached Saved on: Saturday 23rd of January 2021 05:08:43 PM