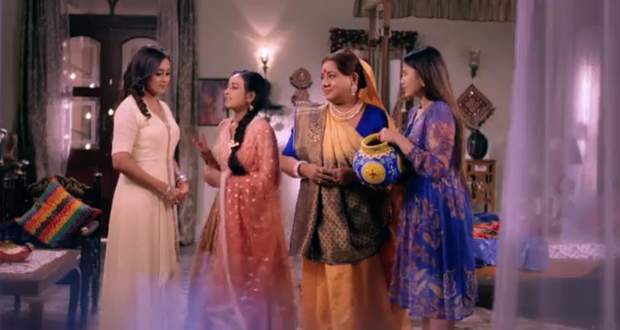 Everyone makes Gehna eat a bite of Khichadi whereas she starts feeling uncomfortable because of its spiciness. Anant eats the Khichdi and question Hiral as to why is it so spicy.

Aman arrives there and Kanak gives him the prasad. He leaves the place and Kanak reveals to everyone that she made new Khichdi for Aman.

Gehna enters Baa's room and gifts her a decorated play pot. She tells Baa that she made the pot for Anant-Radhika's Chandlomatli ritual.

Hima-Hiral try to find out about Kanak's plans while cleaning the dishes. Kanak scolds them and they request her to reveal her plan.

Kanak says that she will plan to get Anant and Gehna out of the house. Meanwhile, Tia pesters Anant to propose Radhika.

Anant practises proposing to Radhika with his eyes closed and at the same time, Gehna arrives there in front of him. She gives him his earphones and leaves from that place.

Elsewhere, Kanak tells Hema and Hiral that they would have to exchange Gehna's real jewellery with a fake one and only then she will include them in her big plan.