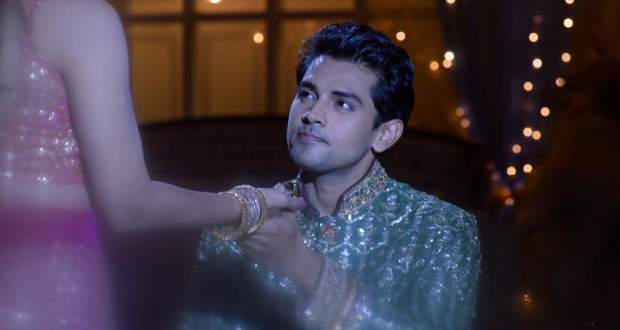 Today's Saath Nibhaana Saathiya 2 9 December 2020 episode starts with Radhika giving Bapuji medicines and telling him that she is going to take all of Gehna's responsibility.

Hiral shows Hema fake jewellery hidden in sweets box but when Gehna comes at the same time makes everyone stunned.

Suddenly, the power went off which makes everyone worried.

The main light falls on Anant and he sings for Radhika which grasps everyone's attention.

Meanwhile, Hema slips from the crowd and goes somewhere with the sweet box.

At the end of the song, Anant nervously goes on his knees and proposes Radhika who joyfully accepts the proposal.

Anant writes an A with Mehandi on Radhika's hand.

Baa-Bapuji congratulates them while Sampan goes to find Hiral.

Elsewhere, Radhika is about to fall but Gehna grabs her hand and saves her which leaves an imprint of A on her hand as well.

Gehna gets worried by seeing the A on her hand but Baa mistakes it and says that she must have done it for Aman.

Radhika realises the situation and signs Gehna to go along with it.

Anant gets a phone call and he leaves to attend it.

Hema and Hiral are replacing the jewellery and suddenly Sampan comes there.

Kanak stops him and says that Baapuji is looking for him and he goes.

Hiral collides with Kanak and the jewellery falls while they hear Anant's voice.

They pick up the jewellery and hide and get scared that he might see the one bangle laying on the floor.

Kanak hears his conversation with the caller and forms a plan.

She tells Hema and Hiral to not let Anant out of the house by any means.

Sagar makes a scene of leaving the house but Anant stops him and tells others to proceed with the rituals.

Meanwhile, Kanak goes outside and tells the agent from the matrimony site to never contact Anant again.

© Copyright tellybest.com, 2020, 2021. All Rights Reserved. Unauthorized use and/or duplication of any material from tellybest.com without written permission is strictly prohibited.
Cached Saved on: Sunday 17th of January 2021 08:43:36 AM