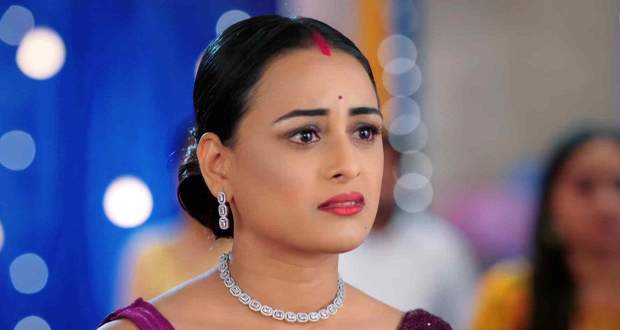 Today's Saath Nibhana Saathiya 2 11th April 2022 episode starts with someone hurriedly knocking at Surya's door just as he was about to sleep.

The door opens and Swara asks Surya for a band-aid. Swara tries to rope Surya in by making flirtatious attempts.

Suddenly, there is a power out and Swara forcefully hugs Surya only to be pushed away.

Understanding Swara's intentions, Surya cunningly lets her out of the room.

Meanwhile, Gehna tries to investigate the power outage and steps on a nail planted by Suhani and Kanak. Hurting, Gehna falls to the floor.

Suhani and Kanak fix the electricity source and warn Gehna to stay low.

The next morning at breakfast, Dimple sees Gehna limping and Surya is visibly concerned. Surya tells Gehna to rest while Kanak will do the chores.

Gehna leaves and goes to water the plants. Viewing Gehna enjoying herself, Surya steps on the pipe and blocks the water.

Both of them gaze into one another's eyes and can feel past emotions linger in the background.

Surya steps forward and is sprayed with water.

For a moment, Surya and Gehna forget all their problems and enjoy themselves in the mini rain. Their happiness is short-lived as Swara cuts the water supply.

Later, Gehna passes by Suhani's room and overhears her talking with Sikandar. Gehna is shocked to hear that Surya is not Suhani's son.

Shocked at the news Gehna drops the bucket in her hand with a thud which alarms Suhani.

Startled at the sudden noise, Suhani tries to investigate.

Suhani tries to emotionally blackmail Surya for being angry and he forgives her.

Suhani reveals that Sikandar is mad at them and doesn't trust Suhani and Surya anymore.

To win Sikandar's trust back, Surya will have to give his property to Sikandar.

Surya agrees and just as he is about to sign the papers, Gehna interrupts him.