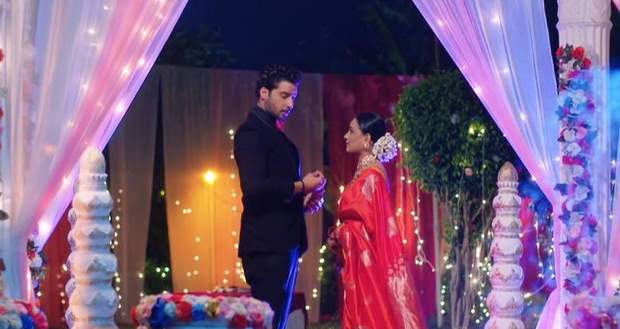 Today's Saath Nibhana Saathiya 2 11th May 2022 episode starts with Gehna calling Urmila and informing her that the arrangements to reveal the truth to Surya are done.

Gehna tells her to come to the party in the evening while Urmila is still hesitant to come forward to Surya.

Later, Gehna is surprised to see her room decorated and Surya sleeping leading her to think that he got tired and fell asleep.

However, just as Gehna comes to the center of the room, Surya pulls a string and flowers start showering on her.

Gehna gets close to Surya's face and teases him while they both start teasing each other with pillow fighting.

They both lay on the bed while Surya confesses his love to her and tells her that he will give gifts to her if she keeps staring into his eyes.

Later in the day, Surya gives a saree to Suhani as a gift and dances with her while Gehna receives Surya's birth certificate in the mail.

While Gehna gets ready for the party, Surya back hugs her and gently kisses her neck.

Further, he blindfolds her and takes her to the garden where she gets surprised to see the accessories of a married woman and realizes that he is giving her the rights as his wife.

He takes her to the Mandap and reveals that he would like to remarry her with respect and love while Gehna happily agrees.

The couple exchanges garlands and takes Phera's while making up their own relatable vows.

At end of Phera's, Surya puts the Mangalsutra around Gehna's neck and fills her hairline with vermillion as they complete the wedding.

Further, Surya asks Gehna if he can kiss the bride while she gets shy and says that it does not happen at Indian weddings.

However, coming closer to Gehna as he speaks, Surya says that their marriage is different.