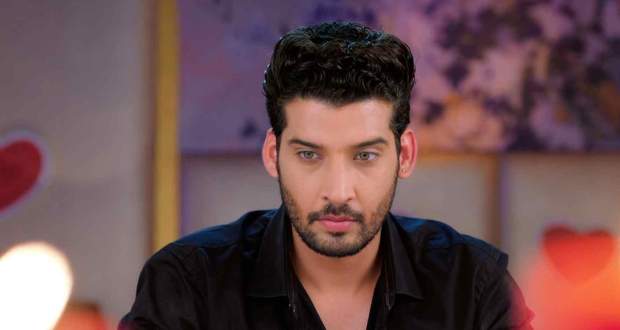 Suhani calls Gehna ungrateful and points out to Surya that Gehna is only interested in his property. Firing back, Gehna calls Suhani a deceiver.

Having had enough, Surya asks Gehna to leave the room.

Gehna won't go without telling Surya the truth and Suhani wants to listen too.

Gehna reveals to Surya that Suhani is not his real mother and shows him the adoption certificate.

Surya looks at Suhani doubtingly and states that a paper can't lie, Suhani tells him to wait while she brings him the proof.

Later, Suhani brings all his toys and pictures and throws them from the staircase. Suhani reminds Surya of all the memories they've had and shows Surya his original birth certificate.

Furthermore, with tears in her eyes, Suhani goes to Gehna and praises her for trying to break her and Surya's bond.

Surya apologises to Suhani and blames Gehna for causing all this havoc.

In her desperate attempts to justify herself, Gehna blames Suhani.

Angry at Gehna's audacity Surya raises his hand to slap her but is stopped by Suhani, who tells Surya to not touch Gehna and that God will punish her himself.

Picking her moment, Swara jumps in the conversation and tries to bring Gehna back to her senses.

Everyone turns on Gehna and Surya tells her to stay away from him. Gehna follows Surya as he storms off.

Having had enough, Surya pins Gehna to the wall and slams his fist on it storming off.

Suhani reveals to Gehna that the adoption papers were fake and it was all a trap to demean Gehna.

Later, Surya still wouldn't look at Gehna and this hurt her. Swara tries to comfort Gehna as she is crying and promises to talk to Surya.

After getting ready, Swara reaches Surya's office and tries to make a move but is told to back off and thrown out by Surya.

Following Swara all along, Kanak agrees to join hands with Swara.