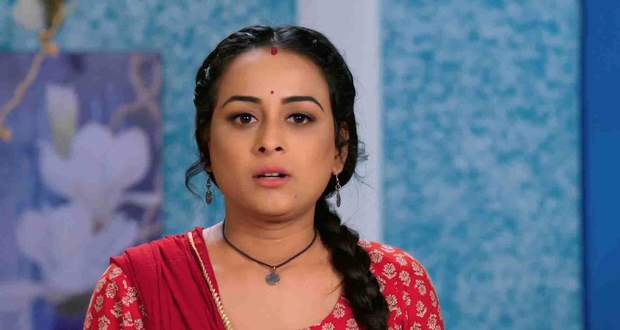 Today's Saath Nibhana Saathiya 2 13th April 2022 episode starts with Jamuna calling Surya and asking him if he could return the property papers.

Surya promises to send the papers.

Gehna asks Surya about Jamuna calling him, but Surya avoids her and starts talking to Swara.

They both go out, leaving Gehna confused.

Later, Surya comes home drunk with Swara, he restricts Gehna from helping him.

Swara takes Surya to his room and lays him on his bed.

Swara brushes her fingers romantically on Surya’s face while Gehna asks Swara to leave the room after seeing this.

Surya murmurs that Swara was right by saying that Gehna plays with others' emotions and deceives them.

Gehna goes to Swara on hearing this and slaps her.

Gehna asks Swara to stay away from Surya whereas Swara retorts and asks Gehna to control her husband.

Gehna gets frustrated and challenges to get Swara out of the house the next day.

The next morning, Gehna asks Swara to get out of the house and Surya stops her.

He tells Gehna has no right to take any decision and says Swara will stay in his house and leaves.

Afterward, Gehna tricks Swara to wait at a café for Surya and she goes there herself instead of Surya.

Swara understands that it was Swara’s plan to keep her away from Surya.

She grabs a girl's purse and puts it in Gehna’s bag.

Later, police come to the café and find the stolen purse in Gehna’s bag and arrest her.

Swara lies to Surya when he enquires about Gehna.

Gehna gets permission to make a call and she calls Surya but he doesn’t pick up.

She had put tablets in Surya’s tea to make him unconscious.

Kanak shows Gehna the video of Swara sitting beside Surya who lays unconscious.

Gehna asks Surya to wake up, but he hallucinates Gehna.

Using the opportunity, Swara gets intimate with him and the call disconnects making Gehna cry.