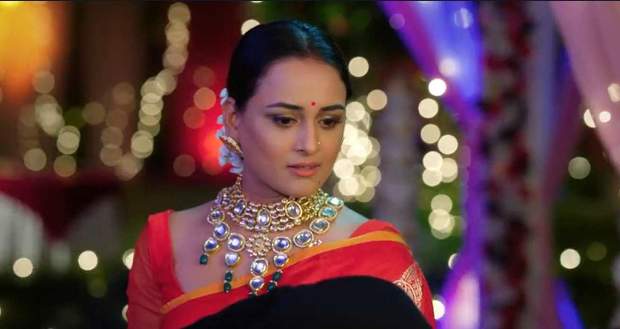 The mother-in-law and daughter-in-law’s pairing receives applause as they pull Surya to their respective sides, making everyone chuckle.

Urmila watches Surya dance with Gehna and Suhani which triggers a flashback inside her mind when Suhani pushed Urmila off the mountain without remorse.

Gehna excuses herself to meet Urmila when Sarika pours chutney on her saree purposefully as she wants Gehna’s red designer saree to herself.

Downstairs, Surya wows Gehna with a romantic song that has her stomach fluttering.

He makes her twirl and wraps his hand around her waist as the song ends.

Meanwhile, Suhani gets informed by the waiter on the call that he has captured Gehna.

However, Gehna is with Surya, and the girl the waiter captured is Sarika.

Suhani slaps Sarika for her stupidity. However, Sarika has a piece of news for Suhani about the birth certificate she found in Gehna’s cupboard.

Suhani locates it and burns it when Gehna catches her red-handed.

Gehna acts defeated in front of Suhani. However, she has numerous copies of Surya’s birth certificates and DNA results.

Panicking, Suhani tries to burn all of them until Gehna gets another one, walking downstairs to reveal the truth to Surya.

Surya gets alarmed to see Gehna a bit distressed.

When the guests leave, Gehna gives a copy of his birth certificate and DNA result to Surya.

Surya read Urmila’s name on it and asks Gehna who is she.

Taking a deep breath, Gehna tells Surya that Urmila is his real mother, not Suhani.