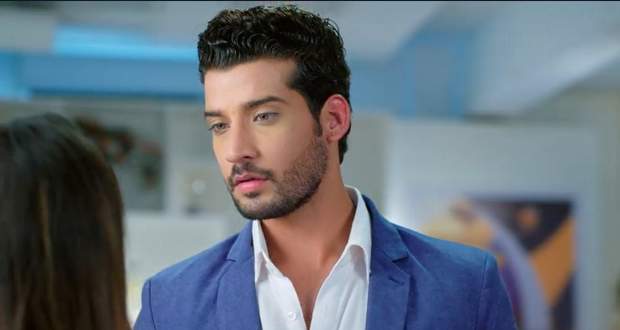 All her dreams shatter in front of her eyes and she falls to the ground.

Surya wakes up and is shocked at his present state.

Gehna calls the police and wishes to register a complaint against Swara for spiking Surya's drink and physically molesting him.

The officer is just as shocked at this revelation as the rest of the family members.

As the officers try to arrest Swara, Surya defends her and apologizes to the officers for wasting their time.

The police warn Gehna to never repeat this heinous act and leave.

With tear-filled eyes, Gehna thinks about her and Surya's lost memories and promises to never admit defeat.

Up in the bedroom, Swara hugs Surya back and thanks him for saving her.

Surya yanks her hands off him and tells her to shut up and throws her out.

On the other hand, Gehna is heartbroken and hurting to her core, her eyes won't stop watering and in frustration, she burns all the bedding that Swara and Surya slept on.

Here, Praful is severely unwell and Hema calls Kanak to inform her that Praful took out a mortgage on his house for Surya and hasn't received a single dime as the last date approaches.

Kanak decides to interrogate Swara regarding the house matter.

However, Swara is rewarded with multiple trips to the toilet thanks to the soup Gehna made.

On the other side, Gehna kneels in front of Suhani and fakes defeat.

Feeling like a God, Suhani admits that she doesn't love Surya and is only using him to get her beloved son Sikandar out.

Cunningly, Gehna records all this conversation and plays it for Dimple.

Gehna is tired and has had enough of the house.

Gehna decides to leave the house once all the truth is on the table.