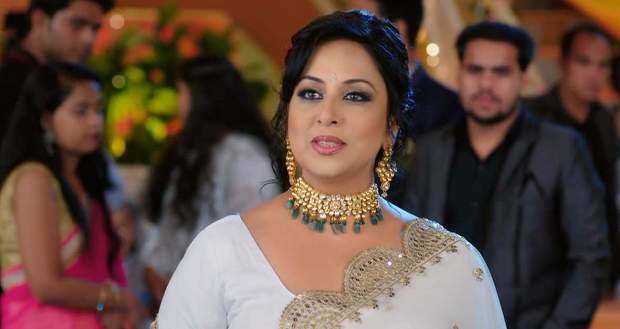 Surya tells Gehna to not talk nonsense while Gehna persists and tells him that Suhani is not her real mother.

Surya scolds Gehna for accusing Suhani while Gehna asks him to ask Suhani about the DNA report.

Suhani stops Gehna and pretends to be the victim and assures Gehna that Surya will never believe Gehna’s lies against her.

However, Surya enquires about the reports while Suhani stands speechless at Surya’s inquisitions.

Suhani is being dramatic about forsaking Surya but Dadi asks her to forsake her daughter and then tells Surya that he is her son.

Surya is shocked to realise that everyone but him knows the truth about his birth and feels dejected.

Suhani asks Surya to talk alone while Gehna stops him but Surya gives in.

Gehna calls Urmila and asks her to come inside but Sarika accuses her of destroying her family.

After a while, Surya comes down with a suitcase in hand while Gehna is praying for him.

Surya tells Gehna that going forward he does not want to talk on this topic and accepts Suhani as his real mother.

Gehna accuses Suhani of manipulation and calls her selfish. She also tells him about poisoning Surya.

She asks Surya to choose between her and Suhani.

Surya shows Gehna his childhood mementoes that Suhani has kept over the years out of love.

Gehna tells him that Suhani is once again manipulating him.

Surya gets angry at Gehna for coming between him and his mother and tells her that he is choosing Suhani over Gehna.

Gehna shames Surya for not respecting the wedding vows.

Suhani innocently tells Gehna that she will leave the house if it's a problem for Gehna and asks Surya to never leave Gehna.

Surya gets impressed with Suhani’s sacrifice and asks Gehna to leave the house instead.