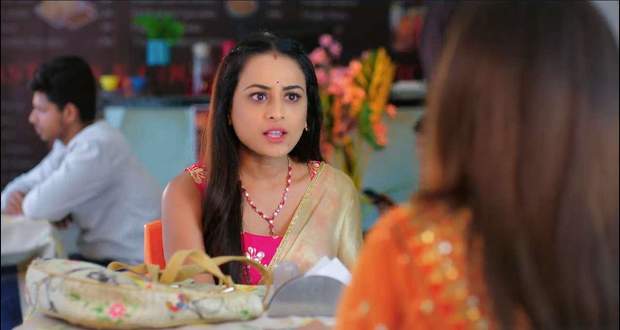 Today's Saath Nibhana Saathiya 2 15th April 2022 episode starts with Gehna frantically calling out for Surya and the latter ignoring her.

Gehna follows Surya but he leaves.

In the office, Gehna sends Surya the recording but before Surya could hear it, Arjun gets hold of the phone and deletes the recording.

At home, Swara tells Kanak about Suhani's complete plan and they reach a mutual understanding of letting everyone battle amongst themselves.

After the arrival of Surya, Gehna is shocked to see him calm and talking to Suhani.

Gehna confronts Surya, but he has no interest whatsoever.

Refusing to drop the subject, Gehna persuades Surya to check his phone to find no recording whatsoever.

Gehna runs to get her phone but can't find it.

Looking at Suhani's grinning face, Gehna accuses Suhani of hiding her phone but Surya has had enough.

Surya calls Gehna a toxic and horrible woman and raises his hand but stops in between.

Warning Gehna to never repeat such a thing, Surya storms off.

Later, Suhani shows Gehna her phone which Suhani dropped in sanitiser and laughs off leaving a dishevelled Swara alone.

Throughout the day, Swara provides things for Surya and Gehna watches from the back.

Gehna is hurt and sad and the tears trickle down her cheeks as she is reminded of all the lost memories.

Just as Surya leaves, two goons enter the house and inform Suhani that Sikandar was the cause of their loss and that Surya will have to pay them 1.5 cr.

Gehna meddles in between as the goons attempt to drag Suhani to build pressure on Surya.

In all the commotion, the goons hang Suhani from the ceiling, her feet resting on Gehna's shoulders.

In an attempt to save Suhani and Gehna and prevent Surya from getting home, Kanak turns off the lights and Swara throws a knife, cutting through the fabric that is gripping Suhani's neck.

In the thick of darkness, the goons fire a bullet straight into Suhani's shoulder and run away.

Later, when Surya sees the remains of blood, Kanak and Swara feed him a make-believe story of Gehna hurting Suhani.