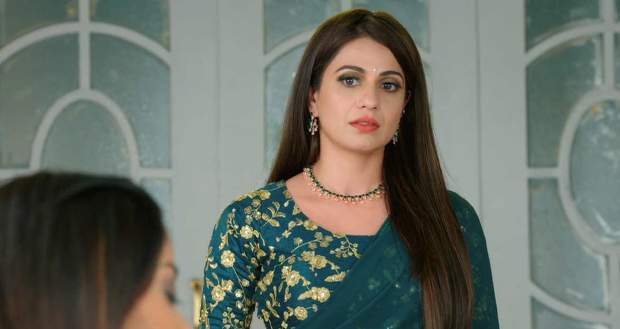 Today's Saath Nibhana Saathiya 2 16th April 2022 episode starts with Kanak and Swara informing a disheveled Surya that Gehna argued with Suhani and shot her in frustration.

Surya runs around in search of his mother and finally finds her in hospital lying amongst doctors and Gehna.

Begging the doctor to save his mother, Surya drags Gehna to his car, and ignoring all her pleas, Surya keeps riving around till they parks in a barren land.

Once there, Surya pulls Gehna out of the car and confronts her regarding her actions.

Surya tells Gehna that he wants to kill her right then and there, blaming himself for loving Gehna and bringing her into their lives.

Surya tells her to go to hell and begins to leave but Gehna grabs hold of him and pleads with Surya to not leave her alone.

Tainted with the hurt and betrayal, Surya curses Gehna to die in that very spot for hurting his family to this extent. Surya pushes her away and drives off.

All alone in the thick of darkness, Gehna is frightened to death.

Surya reaches the hospital and the doctor informs him of the successful surgery. Furthermore, the doctor tells Surya to thank Gehna for bringing Suhani in time.

Dimple scolds Surya and asks him if he really thinks Gehna could kill someone.

In the woods, a tree falls over Gehna knocking her to the ground. A car approaches and Swara walks up to Gehna.

With the help of her men, Swara saves Gehna but swaps her attitude the very minute Gehna thanks her.

Anger burning in her eyes, Swara spits all her bitter emotions and tells her men to do whatever they want with Gehna and leaves.

Drowning in his own guilt, Surya is burdened with more as he finds out that Gehna filed a complaint against the goons who hurt Suhani and helped the police in their arrest.

Surya realizes his mistake and runs to bring Gehna back. On the other hand, Swara's goons are about to burn Gehna alive.