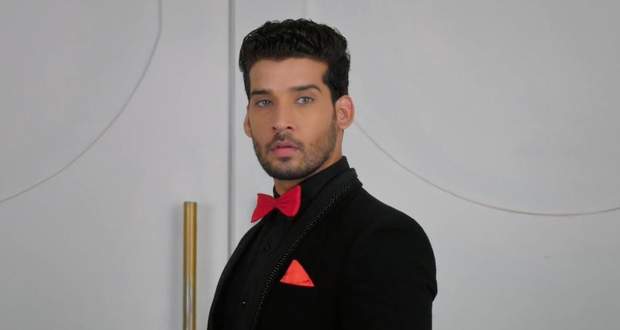 Today's Saath Nibhana Saathiya 2 16th May 2022 episode starts with Surya ordering Gehna to leave the house instead of Suhani.

With hurt palpable in her voice, Gehna requests Surya to listen to her once.

However, Surya walks upstairs with Gehna following him like a lost puppy as Suhani smirks secretly.

As Surya repeatedly tells Gehna to leave him alone, she reminds him of their wedding vows but he pushes her to close the door.

Gehna gets hurt and the blood oozes out of her hand, instantly worrying Surya.

He opens the door, ducks down, and tends to her wound, looking at Gehna softly.

Gehna asks him why he is worrying so much when he has already made a decision to divorce her.

Standing upright now, Surya steps back and closes the door on Gehna’s face.

He tells Gehna he cannot decrease the pride he feels for Suhani in order to love Gehna more through the door.

Gehna walks toward Kanha-Ji’s idol, admonishing God for testing her patience level so much.

At night, Dimpy and Rajesh bring food for Gehna. Gehna cries like a baby as Rajesh comforts her and Dimpy hand-feeds her.

They both believe if Surya gets to meet Urmila, his real mother, his blind love for Suhani will wane over time.

Meanwhile, Urmila calls Gehna and requests her not to leave Surya alone under Suhani’s malice.

Gehna agrees and decides not only to save Surya but also to fight for her self-respect, demanding equality in her marriage.

Suhani informs Sarika how she emotionally manipulated Surya which led him to kick out Gehna.

However, she strongly suspects someone’s presence that is making Gehna take such bold steps against Suhani.

© Copyright tellybest.com, 2020, 2021. All Rights Reserved. Unauthorized use and/or duplication of any material from tellybest.com without written permission is strictly prohibited.
Cached Saved on: Sunday 2nd of October 2022 05:10:29 AM