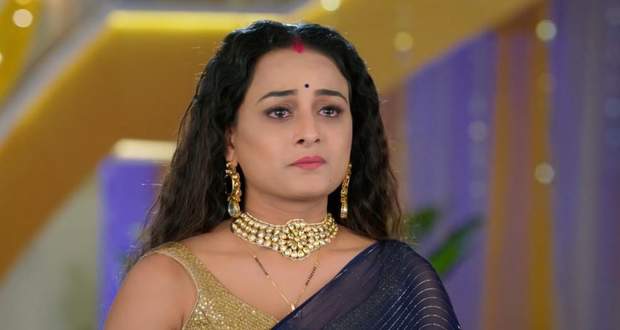 However, the gift is a cage with two rats inside it.

Suhani slaps Shreya, confronting her about the time Shreya helped Gehna get bail and come out of the jail.

Suhani suddenly opens the cage, letting out the rats, and scaring Shreya.

Suhani threatens Shreya once more before she leaves her room.

However, Gehna arrives just in time after hearing Shreya’s screams.

Grabbing Shreya’s hand, she helps her come out of the room amidst the running rats.

Suhani crosses her arms and tells Gehna to stay out of the family business as she is an ‘outsider’ now.

Gehna tells Suhani that she is still the missus of the house and threatens her with IPC Section 498A which speaks of domestic violence.

The next morning, Surya enters the kitchen, calling Gehna’s name, and asks for tea.

He soon realizes they are not together anymore and begins to make his tea.

Gehna’s constant staring makes Surya nervous all of a sudden as she leans close and whispers in his ear.

He reminds Gehna, that someone will catch them.

However, Gehna just laughs and reminds Surya he has forgotten to wear his pants today.

Gehna slips due to water on the floor with Surya saving her as the towel comes off his waist.

Their moment gets interrupted when Rajesh calls Gehna.

Shreya tells Gehna that she is her last hope to reunite her with her son, Karthik.

Meanwhile, Suhani meets a lawyer and bribes him to get Surya and Gehna divorced within seven days.

At her workplace, Gehna encounters a woman who has been beaten up by her mother-in-law.

Gehna consoles the woman but is reminded herself of how easy it was for Surya to tell Gehna to leave the house.

Suddenly, someone calls Gehna a "Kitabi-Kida" from afar until she realizes he is her friend, Agastya.

Gehna’s face becomes sad when Agastya asks about her marriage to Surya.

© Copyright tellybest.com, 2020, 2021. All Rights Reserved. Unauthorized use and/or duplication of any material from tellybest.com without written permission is strictly prohibited.
Cached Saved on: Saturday 1st of October 2022 09:42:25 PMCached Disp on: Sunday 2nd of October 2022 04:37:25 AM