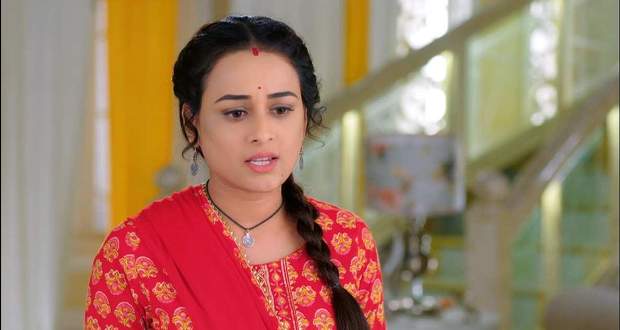 Today's Saath Nibhana Saathiya 2 18th April 2022 episode starts with Swara and Kanak enjoying themselves in the absence of Gehna and Suhani.

Swara's goons enter and lie to them regarding Swara's passing but Swara isn't very easy to fool and asks them to bring dead Gehna's picture.

To release their payment, the goons decide to search for Gehna once again.

In the forest, Surya is frantically searching for Gehna. Surya begs the Lords to save his Gehna.

Just then, blood drops on Surya's hands, and horrified Surya looks up to find Gehna resting on a branch unconscious.

Surya climbs the tree, with sweat trickling down his cheeks, Surya pulls Gehna closer as her head rests on his chest.

Managing to bring Gehna down, Surya lightly taps Gehan's cheeks and calls out to her. Hearing Surya's voice, Gehna stirs back to consciousness.

With their noses nearly touching one another, Surya promises that nothing bad will happen to Gehna again.

Breathing into each other's skin, Surya lifts Gehna into his buff arms and carries her to safety.

Surya fetches water and puts the bottle to Gehna's lips and keeps pushing her hair back, lightly brushing his finger over her cheeks.

Just then, four goons approach Surya and he fights the goons and they run away.

Remembering last night Gehna refuses to go with Surya and asks him about his true feelings.

Taken aback by this sudden question, Surya lies to Gehna that he needs to keep her alive to bring Sikandar back.

Gehna tries to show Surya the truth but he still decides to turn a blind eye. Being done with everything, Gehna turns around and leaves.

His insides screaming to pull Gehna back in, Surya stands there like a statue and then slowly turns to leave too but not without taking a look back at every other step.

Here in the hospital, Suhani gains consciousness and Dimple tells her to accept the fact that Gehna saved her life.

Suhani calls Sikandar who tells her to manipulate Surya and execute their plan.