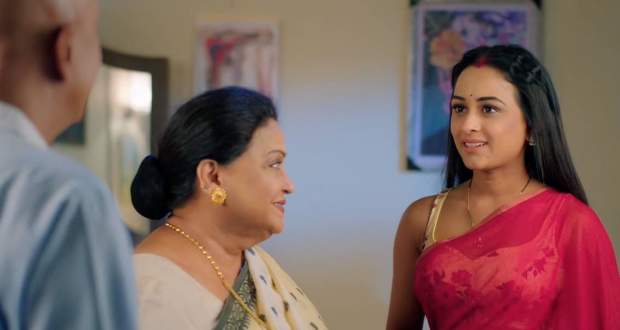 Today's Saath Nibhana Saathiya 2 18th May 2022 episode starts with Suhani telling Surya how long he will be in love with her and appearing worried.

She sits down beside Surya and hands him the divorce papers to be signed.

Surya gets alarmed reading the divorce paper and puts his head on Suhani’s shoulder like a little kid.

He tells Suhani he is not strong enough to divorce Gehna.

However, when Suhani cries, emotionally manipulating Surya, he agrees to sign them.

Rajesh watches Suhani’s pretense and winks at Dimpy to scream.

Dimpy yelps, acting as if her foot is broken. Surya rushes toward his grandmother and inspects her sprain.

Dimpy asks Surya to drop her at the Temple with Suhani cursing the old folks for pulling an act when Surya was ready to sign the papers.

On the other hand, Agastya advises Gehna to leave Surya.

Gehna says she can’t leave Surya because she loves him.

Meanwhile, Gehna and Surya lock eyes when both of them serve food to the orphans inside the temple.

The priest requests the couple to perform the Aarti together.

Meanwhile, Surya’s mind is conflicted about whether to sign the divorce papers or not.

He walks on the edge of the terrace.

Gehna sees a nightmare and walks madly, searching for Surya.

Surya immediately hugs Gehna as she checks whether he is hurt or not.

She falls unconscious a second later as Surya carries her in his arms.

Gehna wakes up minutes later and tells Surya she had a nightmare involving him.

Later, Gehna pours her heart out to Shreya and tells her she just wants to live a normal life with Surya; she’s tired of Suhani’s tricks.

On the other hand, Dimpy and Rajesh talk about Surya and Gehna’s future and how to stop the divorce from happening.

Rajesh hints at calling Urmila to the house as she is the only option who is not afraid of Suhani’s shrewdness.

© Copyright tellybest.com, 2020, 2021. All Rights Reserved. Unauthorized use and/or duplication of any material from tellybest.com without written permission is strictly prohibited.
Cached Saved on: Sunday 2nd of October 2022 06:42:40 PMCached Disp on: Friday 7th of October 2022 03:31:28 PM