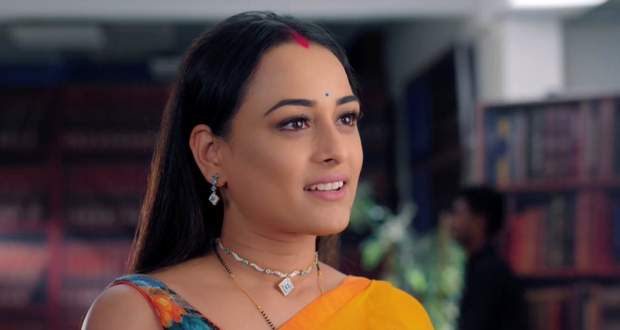 Today's Saath Nibhana Saathiya 2 19th May 2022 episode starts with Sarika asking her mother what are the symptoms of pregnancy.

After telling her all the symptoms, Suhani assumes that Sarika is pregnant.

Sarika clears the assumption and tells Suhani that she thinks Gahena is pregnant.

Suhani brushes off Sarika’s worries and asks her to leave the room.

In the morning, during breakfast, Gahena asks Shreya to bring pickles as she has lost her appetite.

Hearing this Suhani is worried because if the pregnancy is true then Surya will never divorce Gehna.

Later Gehna goes to the medical shop and Suhani follows her.

On the other hand, Sarika goes to meet Sherya in the kitchen and starts asking questions about Gehna’s pregnancy.

Hearing this, Shreya calls Gehna and advises her to use Suhani’s assuming for her own benefit.

Meanwhile, Gehna also notices Suhani’s car behind her so she decides to play along.

Arriving at the medical shop, she calls Agasthya and tells him that she has a plan to stop her and Surya’s divorce.

Gehna then informs the medical shop employee that if someone asks for her then he can say she has gone to meet a gynecologist.

Saying this, Gehna leaves the place knowing Suhani will fall for this.

Suhani arrives at the medical shop and after hearing about Gehna’s appointment with the doctor she is now confirmed about Gehna’s pregnancy.

However, Sarika calls Suhani to inform her about Kaddu bua’s arrival.

Suhani gets worried after hearing the news so she rushes home.

Meanwhile, in Seth’s house, everyone is getting ready to welcome Kaddu bua but Suhani asks Dimple if they can postpone Bua’s arrival.

Though Dimple informs her that she can’t do anything.

Later, Gehna and Shreya are discussing their plan but Gehna gets upset thinking that she is using pregnancy.

Shreya consoles her by saying that Gehna will conceive soon.

Hearing this, Gehna starts imagining her and Surya’s life after having a baby.

At the same time, Suhani is telling Sarika that she is unable to take all this stress.

In the end, Gehna arrives there and tells Suhani that she knows how to take her things back from others.