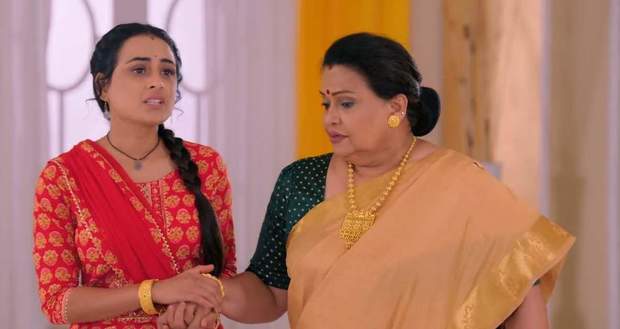 Today's Saath Nibhana Saathiya 2 1st April 2022 episode starts with Gehna asking Surya about pretending that she is pregnant while knowing the truth completely.

However, Surya announces on stage Gehna's pregnancy and asks them for their best wishes.

Meanwhile, Gehna spills curd on Surya’s jacket and follows him to his room.

In his room, Gehna enquires to Surya about the drama that he was playing outside and what business nonsense was he feeding to Praful.

Surya remains unconcerned and tells her that just like she is lying to his family he is also returning the favour.

Suhani threatens Gehna to stop coming between her and Surya. However, Gehna is not intimidated by her but tells her to worry about the day when Surya will find her true face and start hating her.

Gehna wishes to tell the truth about her pregnancy to Anant’s mother but stops when she hears of Ba’s illness.

After a while, Praful and other are leaving and asks Surya to look after Gehna.

As Ba asks Kanak to pack her things, Gehna requests her to leave Kanak with her for a while, as she needs her.

Ba does not believe Gehna and tells her that Kanak will only cause problems for her.

However, Kanak is blackmailing Gehna therefore, Gehna lies about Kanak's attitude and tells them that she has changed in the past few days.

Praful agrees to leave Kanak with Gehna and takes her leave.

Gehna overhears Suhani’s conversation with Arjun where she is planning to bring Sikander home.

Meanwhile, Gehna mixes some powder in Surya’s milk to prevent him from going to meet Sikander.

Soon Surya starts to feel ill and cries in pain.

Later, the doctors prescribe some medicines and ask them not to leave him alone at all as he might collapse.

Suhani falls asleep while sitting beside Surya and Gehna comes in to remind Suhani about Surya’s medicines.