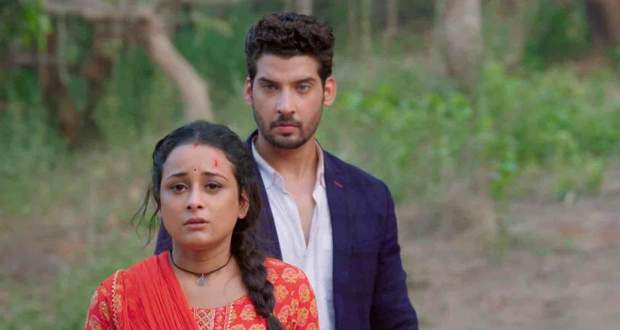 Worried for Gehna and furious at Hema, Jamuna slaps Hema hard in the face and begins to drag Gehna to the hospital.

Hema picks her chance and puts Gehna's hand on Jamuna's head and asks her to tell the truth.

Quiet as a stone, Gehna says nothing, Hema blurts out and tells Jamuna that Gehna isn't pregnant. Having her truth sprawled right ahead of her, Gehna agrees.

Praful overhears their conversations and gets weak in the knees.

Paresh encourages Gehna to tell everything that has been happening to her in the Seth house.

Just as Gehna is about to speak, the broker tells them to evacuate the house right away.

Gehna frantically calls Surya but he doesn't pick up as Surya is about to meet Sikandar and switches off his phone.

Surya asks Sikandar if he is innocent, hearing his brother's trust slipping away, Sikandar reminds Surya of all the happy times.

Here at the Desai house, everyone is stripped of their assets, from cash to their watches.

Still, the amount is not covered, the collector tells them that Jamuna's mangal sutra will make up for the missing amount.

As the woman is trying to drab the mangal sutra, Jamuna begins to wail and pull away. Stressed and regretting his action, Praful blames himself till he attains a heart attack.

On the other hand, Surya tells the guards to drag Kanak and Swara out of their house.

At the hospital, the doctor informs them that Praful needs immediate surgery but they won't be able to proceed until the bills are paid.

The ward boys begin to shift Praful into a cheaper hospital but Gehna stops them and tells everyone that she will bring all their money back and save Praful.