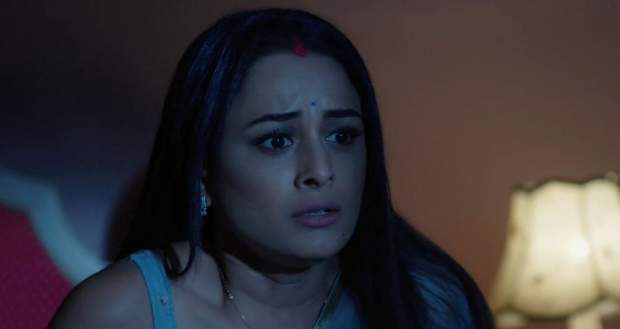 Today's Saath Nibhana Saathiya 2 20th May 2022 episode starts with Sarika taunting Suhani about Gehna’s pregnancy and how it will cause trouble for her.

Hearing this Suhani orders Sarika to close her mouth.

In the morning, Suhani goes to Surya’s office to give him his lunch and starts manipulating him about his and Gehna’s divorce.

She claims that if Gehna drags the divorce matter to court then it will harm her image.

Being a perfect son, Surya promises Suahni that he will try everything in his power to stop Gehna from dragging the matter to court.

Seeing this, Dimple asks Gehna if she is pregnant but Gehna denies it.

However, Rajesh orders Gehna and Surya to hide their divorce from Kaddu Bua.

He further explains that Kaddu bua is very strict and she does not like divorce.

Hearing this, Suhani is more stressed now as she thinks she will lose this battle to Kaddu bua.

Surya gets up from the table and tries to walk away but his foot gets stuck into Gehna’s wools which causes them both to fall.

While Gehna and Surya are hypnotized by each other eyes Sarika also gets up from the table and breaks them apart.

Later in the night, Suhani calls her sister Shakuntala for help, and Shakuntala agrees.

When Sarika asks her why she wants Shakuntala here, Suhani claims that Shakuntala is like Shakuni mama (Mahabhart’s character) who has perfect diplomacy brain. She also thinks that Shakuntala will be perfect to handle Kaddu bua.

The next day while watering the rose plant, Gehna starts remembering her and Surya’s happy moments.

Surya then approaches and does not smile at that and tells Gehna that he wants her to sign the divorce paper at home.

Later she tells Surya that he is very blinded by Suhani’s love.

In the end, Gehna gets a call from Agasthya who informs her that the divorce date is in three days.