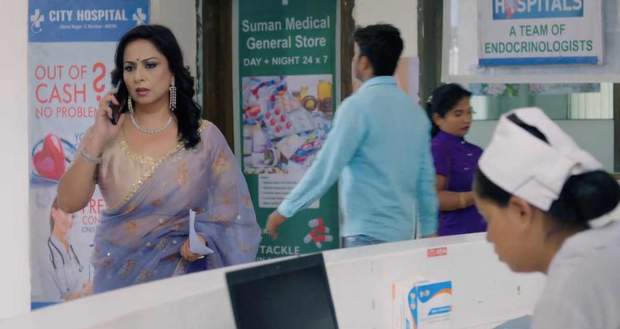 With Sikander already inside the jail, Suhani is left alone to deal with Gehna.

With racing thoughts, Suhani opens the tap water but is shocked to see red water, appearing like blood, come out of the tap.

She screams as Gehna and Shreya enter the kitchen.

Gehna inspects the sink water herself and tells Suhani that there is no red water.

She advises Suhani to relax as she rubs her belly in front of Suhani to elicit a reaction.

As Gehna and Shreya leave, a discomforted Suhani decides to keep a knife hidden between the flowers laid on the floor as décor to hurt Gehna.

However, Surya walks in the same direction too; busy on a call.

As Gehna walks toward the center of the hall, a strong wind blows off the flowers, exposing the knife.

Gehna spots it and puts her hand hurriedly over the knife to prevent Surya’s foot from getting hurt.

Blood oozes out of Gehna’s hand as Surya panics and yells about who kept the knife on the floor.

A concerned Surya cleans Gehna’s wound as he apologizes to her over and over again.

Later, Suhani visits the hospital, and her tension increases when the nurse informs her that Gehna’s blood sample result indicates that she is indeed pregnant.

As Suhani is about to fall asleep in the night, she feels someone tug at her blanket.

Suhani hears a burst of haunting laughter as the window flap due to the strong winds.

Believing it to be Urmila’s ghost, Suhani gets frightened when Urmila announces that Gehna and Surya’s child will be the one to take Suhani’s life, just like she took Surya away from Urmila.