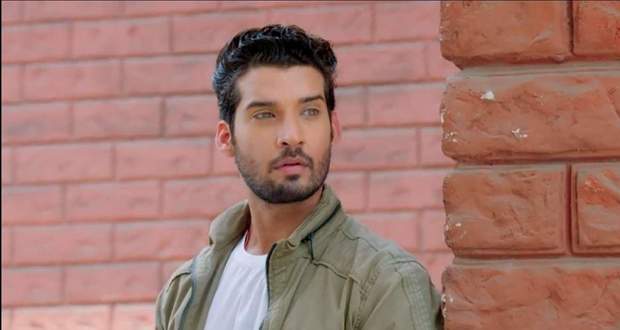 Jamuna comforts Gehna and begins to curse Surya but Gehna puts her hand on Jamuna's lips. With widened eyes, Jamuna asks Gehna if she still lives with Surya.

Here, Surya takes off his shirt revealing a robust body covered in scars.

Insanity takes a check as Surya visualizes Gehna applying turmeric to his wounds.

Not being able to come to terms with his heart and head, Surya punches the mirror, shattering it into pieces, blood dripping from his knuckles.

Later in the hospital, Jamuna and Pankaj are busy with Praful's discharge papers.

Not being able to take control, Praful's wheelchair begins to fall off the stairs and Surya catches him just in time.

Praful asks for Gehna and Surya's lies through his teeth.

Telling Surya that Gehna is one in a million, Praful tells him to maintain Gehna's trust at all costs.

Jamuna warns Surya to never come around them and help Gehna if he is even a bit human left.

Kanak tells Surya that he must mark every word Gehna says because telling the truth is her strength and also her weakness.

In the prison, Gehna makes some instant grudges as she refuses to salute and follow Bubbly, the queen bee of the prison.

To show Gehna her rightful place, one of Bubbly minions spits water all over Gehna's food and knocks her to the ground.

Here, Sikandar gifts Surya a camera and tells him to take a step back and relax because now he will take care of the business.

Surya is instantly reminded of Gehna and insists on joining the business.

Realizing that Surya has changed, Sikandar decides to cut the decaying arm off before it spreads.

Visiting Gehna, Sikandar tells her of his plan and gives her 24 hrs to save her sindoor.

© Copyright tellybest.com, 2020, 2021. All Rights Reserved. Unauthorized use and/or duplication of any material from tellybest.com without written permission is strictly prohibited.
Cached Saved on: Monday 26th of September 2022 10:09:43 PM