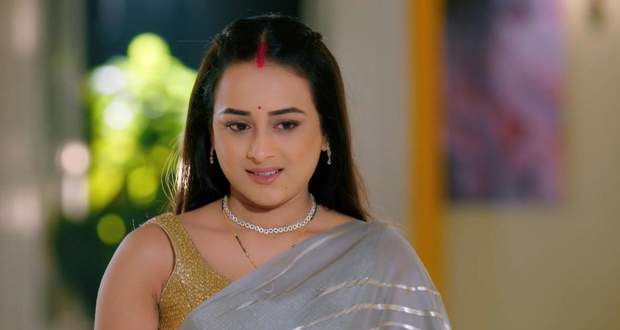 Today's Saath Nibhana Saathiya 2 23rd May 2022 episode starts with Suhani getting scared of a ghost and running away from her room.

Suhani then approaches Sarika in her room and asks if she can sleep here with her.

Sarika agrees and then she asks Suhani why Gehna has not told Surya about her pregnancy yet.

To this Suhani replies that Gehna will reveal this news in front of the judge so she can get sympathy from everyone.

She further adds that she will make sure the divorce happens by signing the papers only.

Meanwhile, Surya and Gehna both are looking through old memories and remembering their happy time together.

Surya however approaches Gehna’s bedroom door but before knocking he walks away from there.

In the morning, Sarika enters the kitchen to taste dahi valle and Gehna once again starts acting like a pregnant lady.

Sarika challenges Gehna that the divorce will not stop and Gehna asks her to bet with her one lakh money for it.

After Sarika goes away, Shreya asks Gehna why she does not tell this news to Surya.

To this Gehna replies that she will not use fake pregnancy to get Surya back.

Later in Suhani’s room, Suhani scolds Sarika for her stupid bet but when Sarika shows her Gehna and Surya’s old photo Suhani is confused because she has torn the photos last night.

When she tells this to Sarika, Sarika being a stupid person tells Suhani that Urmila’s ghost must have returned to the house, and now she is messing with Suhani.

Suhani however brushes this off and walks away from there.

Later she follows Suhani and sees her with Agastya in a restaurant.

Seeing Gehna with another man, Suhani takes pictures of them to show Surya.

While driving, Suhani hallucinates about Urmila’s ghost and hits a homeless lady.

When the homeless lady asks Suhani to pay Suhani gives reluctantly and drives away from there.

Seeing Suhani like this, Gehna and Urmila are very happy.

While everyone is worried about Suhani’s well-being in Seth’s Mansion, Suhani arrives at the doorstep looking like a scared puppy.

© Copyright tellybest.com, 2020, 2021. All Rights Reserved. Unauthorized use and/or duplication of any material from tellybest.com without written permission is strictly prohibited.
Cached Saved on: Sunday 2nd of October 2022 10:43:07 AMCached Disp on: Monday 3rd of October 2022 08:02:05 PM