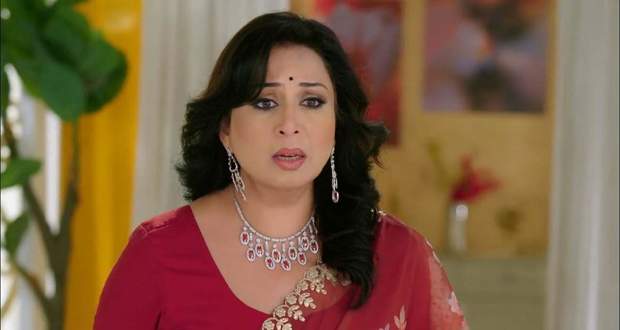 When Surya asks her why she was not picking up his call Suhani ignores his worries and announces she is going to sleep.

While Suhani is walking toward her room a flower vase falls to the ground causing her to scream.

Surya then accompanies Suhani to her room and orders Sarika to stay with her in her room.

In the room, Suhani tries to tell Sarika that she has seen Urmila again but Sarika ignores her worries and tells her that she is just being paranoid.

On the other hand, while Dimple and Rakesh are discussing Suhani’s horror experience Gehna approaches them and explains that Suhani is getting visits from her past that’s why she is scared right now.

Rakesh then asks Gehna if it is Urmila.

To this Gehna responds yes and she further explains how she and Urmila are manipulating Suhani to believe that Urmila’s ghost has returned to take revenge on Suhani.

Gehna then asks Rakesh and Dimple not to say these words to anyone else in the family and tells them that this time she is directing the saas-bahu drama and everything will happen as she wants them to.

Later in Suhani’s room, Suhani tells Sarika that she will murder Surya the same way she has murdered his mother Urmila.

She is just waiting for Surya to get a divorce from Gehna and then she will manipulate Surya to give her all the property.

Later in Dimple’s room, Rakesh thanks Gehna for always protecting Surya from Suhani.

Later while talking on the phone, Surya and Gehna collide in the living room and then Gehna’s saree gets stuck at Surya’s watch.

Surya helps Gehna with her saree but they both end up falling to the ground and Surya quickly gets up and walks away from there.

In the end, their plan works as Suhani gets scared very much and starts screaming. Suhani then notices blood-stained footprints in her room and falls unconscious to the floor.