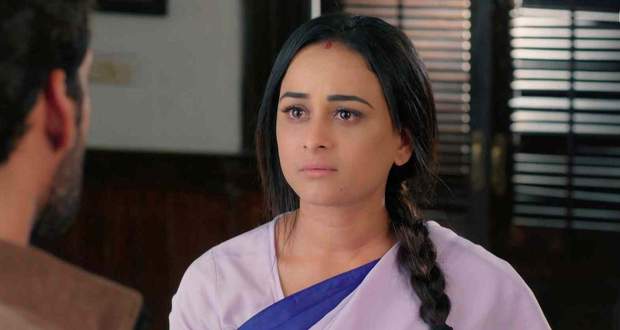 Today's Saath Nibhana Saathiya 2 25th April 2022 episode starts Sikandar announcing to everyone that he will be throwing a party the next day.

Being his mother, Suhani knows the party isn't just for fun and there must be some hidden reason behind it.

Suhani confronts Sikandar and he tells her of his plan to kill Surya.

Eyes widened and with authority in her voice, Suhani tells Sikandar that they will never kill Surya.

Suhani tells him that Surya is her son and that she will never let Sikandar kill him.

Handing the bottle of poison to Suhani, Sikandar tells her that she will be the one to kill Surya.

In the prison, Gehna frantically tries to find a way to save Surya and Paresh tries to assure her that he will do something.

Later, Gehna is still trying to figure out a way to get out of the prison when she sees Bubbly lying on the bench and plots a plan.

Gehna splashes water on Bubbly's face which aggravates her to fight.

As the fight heats up Bubbly draws out a knife and stabs Gehna.

Gehna is carried to the hospital and Surya is informed right away.

After gaining consciousness, Gehna tries to make an escape but a doctor advises her against it.

The doctor is revealed to be Abhay who still is obsessed with Gehna and tells her to run away with him.

Gehna agrees to run away with Abhay but he must take her to Surya prior.

Here, Surya argues with the constables to let him in while Gehna claims down the window and runs for her Surya.

Once outside, Gehna manages to squeeze into the car's trunk as it drives Surya back to the Seth house.