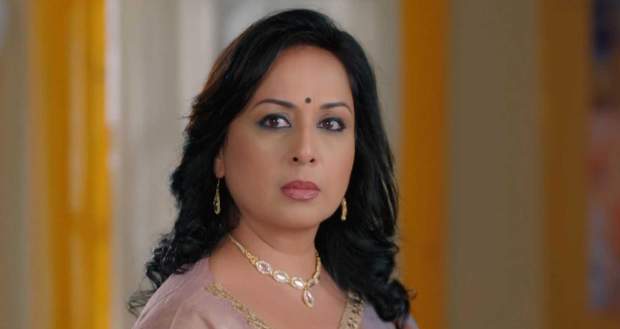 Today's Saath Nibhana Saathiya 2 26th April 2022 episode starts with Gehna stepping out of the car trunk and trying to figure out a way to get into the Seth house.

Just then, Gehna sees the catering truck approaching, an idea lights up in her head.

Gehna pleads with the incharge to let her in their group.

Inside the Seth house, Sikandar announces that all the complete credit for his release goes to Surya.

To entertain the crowd, Surya and Sikandar perform a dance.

Gehna enters the house disguised and can't take her eyes off of Surya's youthful smiling face.

Gathering herself, Gehna begins to track Sikandar's movements and simultaneously keeps an eye out for Surya.

As both Sikandar and Surya are dressed in the same suits, Gehna follows one and tries to tap him.

Thanks to her lucky stars, Suhani calls out to Sikandar before Gehna could reach him.

Suhani worriedly asks him if killing Surya is necessary.

Sikandar hands Suhani a drink and poison and tells her to stick to the plan.

Hearing Sikandar, Gehna is shocked to her core and drops the tray in her hand, startling Sikandar and Gehna.

Suhani refuses to add the poison but is unaware that someone has already added it.

Alarmed at the noise, Sikandar follows the sound and spots Gehna who is trying to find refuge in the crowd.

Dragging Gehna, Sikandar locks her up.

Outside, Suhani gives a speech and expresses her love for Surya.

Surya stands there with his mouth wide open as he is finally blessed with words he has been craving to hear for so long.

Suhani hands him the drink and as Surya begins to drink it Gehna stops him and tells him of Suhani's plan.

To prove that it's all Gehna's delusion, Surya drinks the drink but he starts feeling a nosebleed and difficulty breathing.

Surya calls out for Suhani as he falls down the stairs, drenched in his blood.