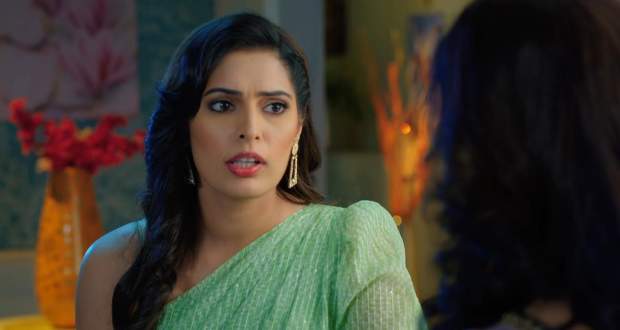 While looking at the Nimbu-Mirch, Sarika notices that the Nimbu has gone orange, and then Sarika tells Suhani that there’s a real ghost in the house.

Later in the storeroom, Urmila starts scaring Suhani with Gehna and Shreya’s help. Urmila then announces in a creepy voice that she is back for Suhani.

Meanwhile, Gehna arrives there and wakes Suhani up with water.

When Gehna asks Suhani why she is so scared, Suhani ignores her and goes back to her room.

While walking away from the house, Urmila collides with Sarika who starts following her and starts asking for her identity.

At first, Urmila refuses to talk but when Gehna also arrives she tells Sarika that she has come to meet Suhani to settle some old debt.

Hearing this, dumb Sarika asks for the bill but Urmila tells her that she will only give the bill to Suhani.

With that said Urmila leaves the house.

Later Sarika enters Suhani’s room but sacred Suhani pushes her to the floor and then she asks Suhani to show her a picture of Urmila.

Seeing Urmila’s picture Sarika exclaims that she has seen the woman in the hallway but Suhani refuses to believe her.

To prove her point Sarika calls Gehna to their room and asks her if she has seen the woman too.

Clever Gehna twists Sarika’s question and tells her that no one was there in the hallway. She further tells Sarika that she must have been hallucinating.

Hearing this Sarika gets sacred but Gehna advises her to stay strong for Suhani’s sake.

Later in Rajesh’s room, Dimple and Rajesh are celebrating because they have successfully sent Gehna and Surya to the garden.

Meanwhile, in the garden, Gehna and Surya meet each other, and then they both start arguing like old times.

When Gehna announces that she is leaving, Surya stops her by showing a shooting star.

In the end, they both tell each other what they have wished for.