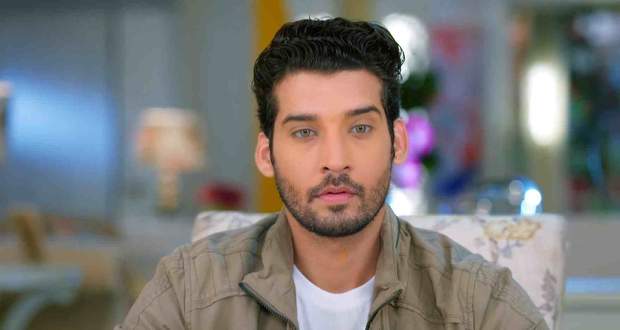 Dimple slaps Suhani and shouts at her. Gehna shrugs off the guards and runs towards Surya.

Sikandar grabs Gehna and calls the police to inform of Gehna's presence.

Gehna grabs a fork and launches it into Sikandar's abdomen.

Taken aback by the sudden pain Sikandar releases Gehna and she runs to Surya's side.

Suhani takes a vase and hits it hard on Gehna's head making her unconscious.

Just then, someone releases a smoke bomb and in the thick of the smoke takes Gehna and leaves.

Everyone searches for Gehna but she is nowhere to be found.

Taking Surya to the hospital, the doctor informs them that Surya is still critical. The police approach and Dimple blames Suhani.

In the Desai house, everyone is watching the news of Gehna's latest adventure. Praful enters the room and everyone falls quiet.

Just then, police enter the house and inquire for Gehna.

The police tell Praful everything that Gehna has done, he hears a ringing in his ear.

Simultaneously, Gehna gains consciousness and finds herself in Abhay's car.

Gehna pleads with Abhay to let her go to Surya but he shuts her up.

The car comes to a sudden halt as there are police checking in the front.

Abhay tells Gehna to hide in the back while he asks the officers to let him go due to his patient's emergency surgery.

Gehna tells Abhay to take her to Surya and when he doesn't listen, she tries to turn the car, resulting in an accident.

Gehna runs away. Bleeding from her wound, Gehna falls to the ground and prays to Lord Krishna to save her.

A snake bites Abhay and he falls to the ground unconscious while Gehna runs to find Surya.

In the hospital, Suhani is worried of the truth being revealed and Sikandar tells her that he will kill both Surya and Gehna.