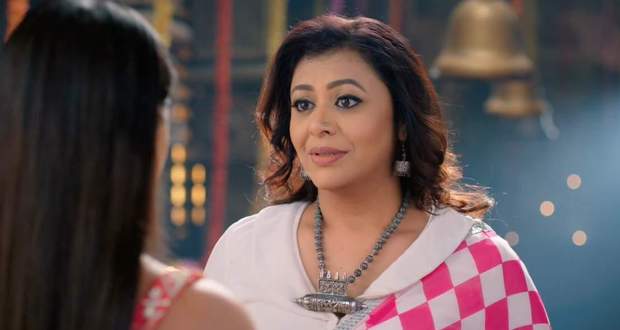 Gehna closes her eyes and makes a wish along with Surya.

However, Surya refuses to tell his wish and asks Gehna to spell hers.

With nothing to hide, Gehna gets emotional and tells Surya she asked for peace, contentment, and for Surya to be happy.

The next day, Sarika punctures the tyres of Gehna’s car so she cannot go to the court.

However, Gehna informs Sarika that she has already asked someone to pick her up so she can go to the court.

After breakfast, Santosh Devi, a tantric lady from Surat walks into the Seth Mansion scaring Sarika.

Suhani furrows her eyebrows and asks what nonsense it is to call a stranger into the house to fix the ghost Suhani has been seeing.

However, Santosh Devi acts upon Gehna’s instruction and warns Suhani about the spirit she is seeing is very strong and wants revenge.

With no option left, a scared Suhani welcomes Santosh Devi and seeks her help.

Meanwhile, Agastya calls Gehna and asks her how much time until she reaches the court.

Breathing deep, Gehna tells Agastya that she won’t come to the court as today she will make something happen that can postpone her divorce with Surya.

A scared Suhani and an intimidated Sarika walk into the space lit with fire.

Mumbling something gibberish, Santosh Devi tries to invoke Urmila’s spirit and asks why she is here to trouble Suhani before she locks her up inside a bottle.

Urmila walks out as Suhani sees her and gets shocked along with Sarika who is also able to see her.

However, Suhani denies doing so until Urmila strikes back and tells Suhani Virendra loved Urmila more than Suhani.

This makes Suhani snap as she finally confesses that she did kill Urmila.