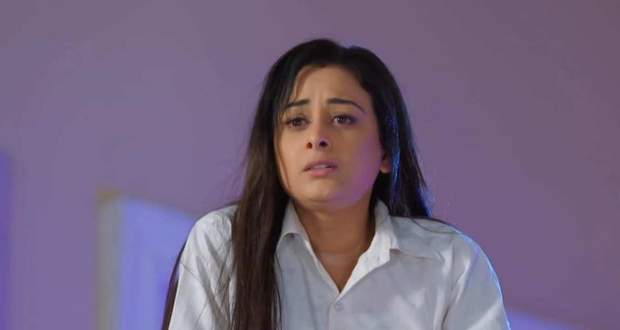 Today's Saath Nibhana Saathiya 2 28th April 2022 episode starts with the doctor telling Sikandar that the poison is spreading vigorously in Surya's body and that he must be given an injection at the earliest.

Just then, Gehna tries to sneak into the room sporting the disguise of a nurse but gets called by the doctors to monitor Surya.

Fumbling, Gehna drops the IV injection and Sikandar catches a glimpse of her and builds suspension.

Before Sikandar could follow Gehna the police officer stops him and has a conversation.

Gehna sneaks into Surya's room and gives him water. Hearing Surya unconsciously call out for her, Gehna promises to be by his side forever.

Gehna hears footsteps approaching and hides Surya. Making a pile of pillows look like a human, Gehna saves Surya from the brutal stabbing offered by Sikandar.

Sikandar realizes that he has been stabbing a pillow the whole time and makes a ruckus of Surya being missing.

Gehna manages to put Surya in a wheelchair and drives him around the hospital trying to find a way out.

Just then, Gehna spots Praful and he helps her get Surya out.

Sikandar misses them by seconds and in frustration reveals everything to Suhani and Sarika.

Later, Gehna realizes that Surya has a terrible fever and remembers the antidote injection that the doctor mentioned.

Praful helps Gehna get the prescription and Gehna leaves the house to get the injection.

Sikandar knows that Gehna will go to the medical store and plans her capture there itself.

Gehna hides and runs from store to store trying to avoid Sikandar's men.

Sikandar starts a Gehna hunt and asks his men to search each and every person on the streets.

Gehna keeps running into Sikandar's men and is out of time as Surya must be given the injection within 2 hrs.