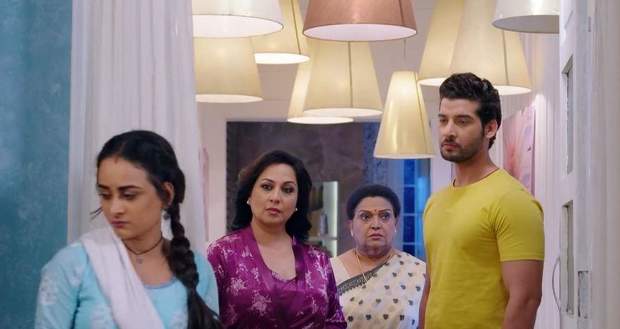 Today's Saath Nibhana Saathiya 2 28th March 2022 episode starts with Gehna pushing off Surya so he does not enter into the bathtub.

Surya gets atop Gehna and hearing the thud, both Kanak and Suhani enter Surya's bathroom.

Seeing Gehna so close to Surya, Suhani loses her temper and shouts at Surya.

She's about to hit Surya on the cheek when Gehna catches her hand.

Gehna informs everyone that there's current in the water. However, no one seems to believe Gehna.

Surya is adamant to prove Gehna wrong and thus is about to enter the water.

In fear and panic, Gehna hurriedly throws a metal object in the water to showcase her truth.

Dimpy then tells Surya if he's still not able to sense Gehna's truth then he can't be more foolish than this.

The next day, Surya prepares internally to apologize to Gehna but feels nervous.

On the other hand, Suhani phones Sikander and Sikander tells Suhani to manipulate Surya as soon as possible so Sikander can get out of the jail.

Surya plans a dinner date for himself and Gehna.

However, Suhani plans to destroy it all. She comes to Gehna while she awaits Surya's presence.

Suhani threatens Gehna and when Surya comes, she pretends that Gehna is the one threatening her.

Misunderstanding gets construed and Surya ends up throwing water in Gehna's face.

The next day, Gehna decides she won't make food for the whole family and goes on strike.

Kanak gets irritated with Gehna's attitude and hatches an evil plan with Suhani to shame Gehna.