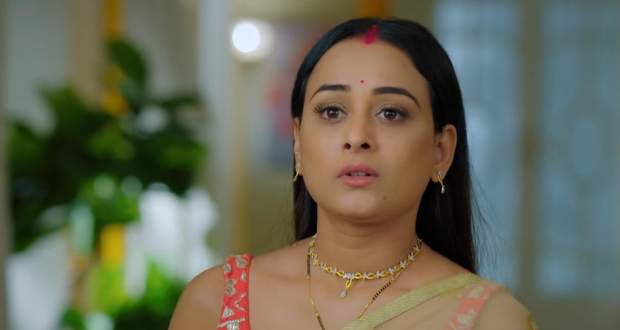 Today's Saath Nibhana Saathiya 2 28th May 2022 episode starts with Urmila provoking Suhani to spill the truth about the stormy night Suhani pushed Urmila off the cliff.

A bothered Suhani accepts that she indeed killed Urmila by pushing her off the mountain as Gehna smiles.

The tantric lady, Santosh Devi, tells everyone to close their eyes now as she pretends to lock Urmila’s ghost inside a glass bottle.

Meanwhile, Rajesh takes care of Santosh Devi in his room as she is his elder sister, Kadu Bua.

When Gehna returns with Kadu Bua’s favourite goat milk tea, Kadu Bua blesses Gehna to win from the tough circumstances around her.

Meanwhile, an angry Surya yells Gehna’s name and asks her the reason for not showing up in the court.

Gehna tells Surya that today she won’t talk but show him the reason she did not attend the hearing.

Gehna gathers everyone in the hall as she inserts the CD into the DVD player to showcase the clip where Suhani admits to killing Urmila.

However, Gehna doesn’t know that Suhani has changed the CD as she realized Urmila is still alive.

When Gehna glares at Suhani and announces she knows it is her evil work, Surya almost raises his hand at Gehna.

A defeated Gehna cries and falls down on the floor.

She hurries toward the storeroom as Surya leaves to search for the original DVD.

However, Suhani shows up smirking as she dangles the original CD in front of Gehna’s face.

Suhani tells Gehna that she is the principal of the game Gehna is trying to play.

Utterly defeated, Gehna watches Suhani burn the CD helplessly as she orders Gehna to finally get out of Seth Mansion.