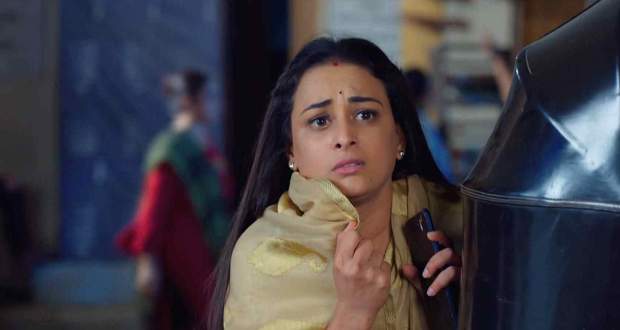 Later, the doctor informs Gehna that Surya is recovering but he also tells them Surya needs a blood transfusion to be out of danger completely.

He asks if the family members with the same blood group could help.

Gehna calls Suhani and informs her that Surya needs blood and asks her to come to the hospital along with Sarika.

Suhani understands that Sikander’s plan has failed since Gehna called them.

Suhani and Sarika later come to the hospital, however, their blood group doesn’t match.

Gehna gets worried about Surya’s life as they are unable to find a donor.

Praful and Jamuna console her and Gehna joins hands before a Krishna idol and prays for Surya.

Later, the doctor informs them that they have got a donor.

Gehna tries to meet the donor but fails.

Suhani weeps crocodile tears as she thanks Gehna for saving Surya.

She tries to convince Gehna that she hasn’t hurt Surya and enquires about Sikander.

Gehna states that Sikander and Arjun are in jail.

Gehna threatens to expose Suhani to expose all her illegal business and send her to jail as well.

She states that she would make Surya turns her, while Suhani challenges Gehna to she would Sikander released.

Gehna retorts to Suhani saying that she has already failed and both Suhani and Sarika leave the hospital frustrated.

Later, Gehna gets emotional as she sees Surya lying unconscious.

She talks and cries near Surya and tells him to stay with her forever.

Surya gains consciousness and finds Gehna hurt and asks the nurse to bandage the wound.

Meanwhile, Suhani and Sarika meet Sikandar and Arjun at the jail.

Sikander is frustrated and behaves wild, while Suhani tries to stop him.

He tells her that he wants Gehna to be killed.

Gehna gets confused about Suhani’s words and doubts whether she actually intended to kill him.

Further, she doubts whether Suhani was Surya’s mother as his blood group didn’t match with both Suhani’s and Sarika’s.

© Copyright tellybest.com, 2020, 2021. All Rights Reserved. Unauthorized use and/or duplication of any material from tellybest.com without written permission is strictly prohibited.
Cached Saved on: Wednesday 5th of October 2022 06:46:38 PM