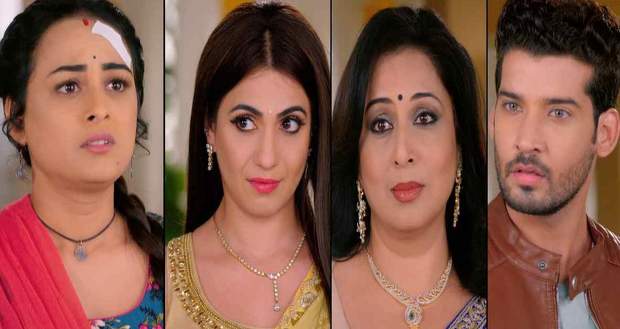 Today's Saath Nibhana Saathiya 2 31st March 2022 episode starts with Suhani confronting Surya about whether he has a physical relationship with Gehna or not.

Suhani is agitated and does not want to lose this fight to Gehna.

Surya denies that he has a physical relationship with Gehna but Suhani gets so irritated that she insists Surya and Kanak leave her alone.

Gehna tries to create a playful rivalry in the room, adding to Suhani’s agitation.

Meanwhile, Sarika receives the fake pregnancy reports of Gehna at the door.

Kanak who was sitting near the entrance takes the reports from Sarika’s hands. Kanak informs Suhani about it.

Suhani loses her control to the point she decides to push Gehna off the stairs.

Surya sees Gehna fall and immediately comes to her rescue. Gehna in pain hesitates and tells Surya to not touch her.

However, Surya does pick Gehna up in his arms and places Gehna carefully on the bed.

Surya confesses that he loves Gehna and Gehna confesses she is not pregnant.

Both of them pause for a moment until Gehna tells Surya that Suhani is evil and purposefully pushed Gehna as Suhani wanted to kill Surya’s unborn baby.

Surya immediately goes to Suhani to confront her.

But with emotional manipulation, she takes advantage of Surya’s soft side instantly.

The next day, Surya ends up calling Praful and Ba from Gujarat to invite them as Gehna is pregnant.

Gehna gets apprehensive and nervous about the whole ordeal. Surya pretends to be the best husband in front of Praful and Ba.

Suhani is happy to see the reversal of Gehna’s plan turning against herself only.

Gehna cannot tell Praful and Ba that she is not pregnant and Surya is keen to make Gehna’s life as uncomfortable as he can.