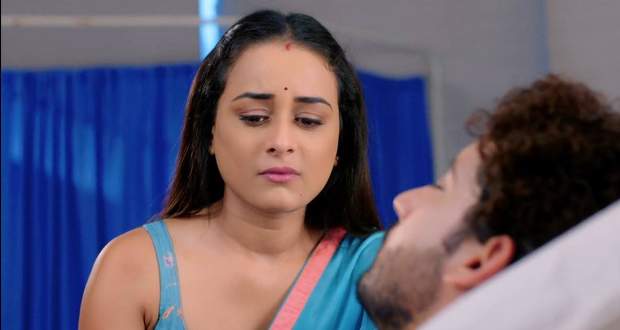 Today's Saath Nibhana Saathiya 2 3rd May 2022 episode starts with Praful sitting by Surya’s side while Suhani and Sarika also arrive there.

Suhani requests Praful to leave the room as she wishes to have a private conversation with him.

Suhani feigns love toward Surya and tells him that Sikander has been framed by Gehna.

Sarika supports Suhani’s point to which Surya yells at Sarika.

He tells both of them to respect Gehna as she is his wife.

On the other hand, Gehna visits Sanjay. Sanjay is the DNA test conductor.

She tells Sanjay to call her as soon as the reports come.

The next day, Surya gets discharged and enters his house in the wheelchair.

Surya tries to get up but loses his balance.

Sikander’s wife apologizes to Surya with folded hands-on behalf of what Sikander did to Surya however, Surya tells her not to feel sorry.

As night approaches, Suhani prepares a full meal for Surya.

Gehna enters the kitchen and begins to prepare “Khichdi” for Surya.

Both the mother and daughter-in-law fight passively over what food item Surya will pick.

Surya picks Khichdi as the doctor suggested he eat light.

Suhani takes back the meal she prepared. Sarika tells Suhani that Gehna once again won.

The next day, both Gehna and Surya spend time in the garden.

Just then, Sanjay calls Gehna while Surya asks who Sanjay is.

Sarika and Suhani are blood related but Suhani is not Surya’s mother.

Gehna’s heart breaks to see Surya be so devoted to Suhani when she is not in real life.

Gehna breaks the news to Surya and he gets shocked.

Suhani accepts that she is not Surya’s mother and pulls out a gun while Gehna requests Suhani to drop the gun.