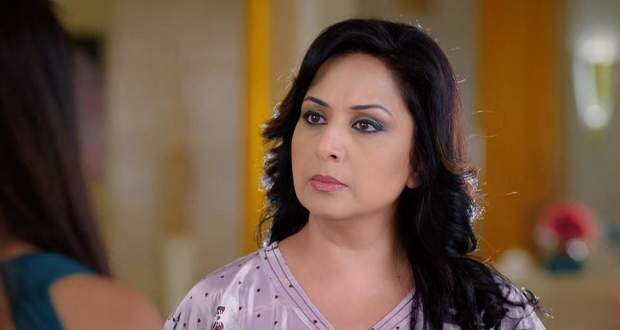 Today's Saath Nibhana Saathiya 2 4th May 2022 episode starts with Gehna dreaming of Suhani shooting at Surya and shouting in agony as she wakes up from that nightmare.

Surya gets worried seeing Gehna’s state and offers her water asking her to calm herself.

Checking Surya’s condition, Gehna lets out a sigh of relief as Suhani did not shoot him in reality.

However, as Surya hears about Gehna’s dream, he becomes agitated and asks Gehna not to talk about Suhani in that manner.

Gehna somehow convinces Surya that everything will be all right from now on and leaves to prepare for Mahendra’s yearly demise ritual.

Meanwhile, Rajesh holds onto a picture of Mahendra and cries his eyes out while Dimple tries to calm him down.

Rajesh tells her that he will carry the secret of Surya and Mahendra with him till his grave and will not disclose it at any cost.

Later, the funeral rites of Mahendra start with Gehna arranging all the things which make Suhani angry.

Gehna along with Surya, sit at the puja and offer their homage in the fire together for Mahendra’s soul to rest in peace.

Panditji calls Suhani who remains busy with her phone and tells Sarika that she is going to show Gehna her true place.

After everyone offers their respect to Mahendra’s picture, Gehna notices an envelope at the feet of the picture and proceeds to see it.

However, she stops in her tracks on hearing the police sirens and notices the police entering the house.

The police announce that they have found the culprit who has given Surya poison and says Gehna’s name.

Gehna denies doing anything but the police inform her that they have found her fingerprints on the bottle and her signature on the receipt of buying that bottle.

As the police ask Gehna to come with them to the police station, Surya offers to go with her but Gehna refuses as she has not done anything bad.

Suhani smirks with satisfaction as she remembers how she cleverly collected Gehna’s fingerprints on the bottle and made her sign the receipt.