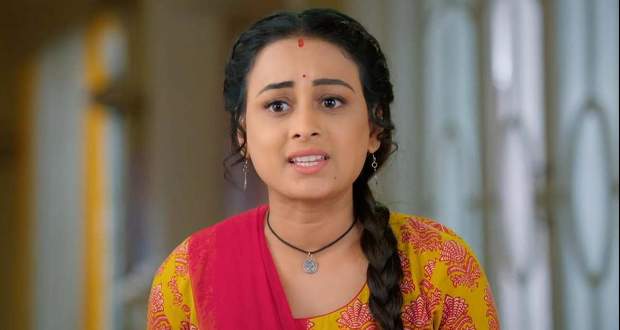 Gehna expresses her concern over Suhani's threat to harm her family.

On the other hand, after continuous efforts, Praful arranges a total sum of 2 crore rupees.

Surya further tries to rope Praful in by expressing disappointment because the 2 crores will not solve his problem.

Gehna picks that exact moment to call Praful. Surya insists that Praful keep the money a secret from Gehna and Praful complies.

Gehna can sense that something is wrong.

Gehna overhears Jamuna talking to Surya through the phone.

Cunningly to clear her suspension, Gehna calls Surya. The ringtone of this phone confirms her suspicion.

Meanwhile, Dimple(Dadi) accidentally slips and hits her head on the stairs.

Gehna summons Suhani and Kanak, pleading with them to call for an ambulance.

Instead of helping her, they blame Gehna and leave her helpless.

Gehna manages to summon the doctor but refuses to leave Dimple's side.

After much convincing by Dimple, Gehna leaves for Surat.

Here, Surya excuses himself and makes a call to the goons.

A gang of goons approaches just as Surya is about to leave.

Surya acts scared and worried to increase pressure on Praful. He is beaten badly by the goons.

Praful tries to intervene but is hurt instead. Jamuna's pleads also go unheard.

In desperation, Praful promises to pay all their money back. The goons give them a 24 hr warning before taking off.

On the other hand, Gehna is stuck in heavy traffic while Praful consults with his lawyer to take a mortgage loan on his house.

Fearing a loss of time, Gehna takes off on foot.

At the same time, Hearing the relator's demand of 15% interest, Praful is caught in contemplation.

She is astonished to see Surya there and her suspicion grows.

Before she could force the complete truth her parents distract her and Jamuna expresses worries regarding the troubles Gehna and Surya keep going through.