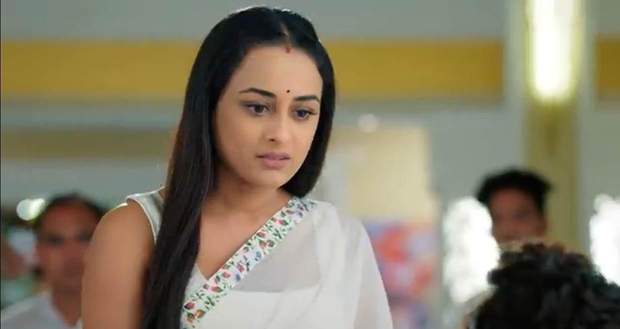 Today's Saath Nibhana Saathiya 2 6th May 2022 episode starts with Surya and Gehna getting into a romantic mood.

Gehna has a towel wrapped around her hair as Surya looks at Gehna lovingly.

She offers him a glass of milk.

Surya drinks the milk out of Gehna's hands. However, his lips get foamed up funnily, making Gehna laugh.

Their night ends after Surya takes beautiful photographs of Gehna as she puts him to sleep; stroking his head.

Meanwhile, Suhani is talking to the police officer in the hall.

Gehna's presence behind Suhani scares her off and she ends up calling Gehna a 'chudail'.

Suhani heads to her room in irritation and discovers that an orange note has gotten stuck under her slipper.

Meanwhile, Gehna searches for the same note in the hall and discovers a small piece of it.

The note reads Gehna to arrive at the Shiva temple at 10 AM the next morning.

Tearing the paper, Suhani makes up her mind to visit the person who wanted to hand this note to Gehna.

Gehna finds the torn pieces in Suhani's room and retrieves them hastily in Suhani's absence.

The next day, during breakfast, Gehna tells Surya to visit the office in Sikander and Arjun's absence.

Gehna's remark makes Suhani anxious which leads her to advise Surya to rest, rather than work.

Suhani is afraid that Surya will get to know her truth about being involved in illegal activities under the name of an NGO.

However, Surya tells Suhani not to worry as he'd love to begin working again to compensate for Sikander's absence.

Before leaving to meet the person behind the orange note, Suhani instructs Sarika to prevent Surya from going to office by making him eat something fishy.

© Copyright tellybest.com, 2020, 2021. All Rights Reserved. Unauthorized use and/or duplication of any material from tellybest.com without written permission is strictly prohibited.
Cached Saved on: Sunday 2nd of October 2022 05:21:44 AM