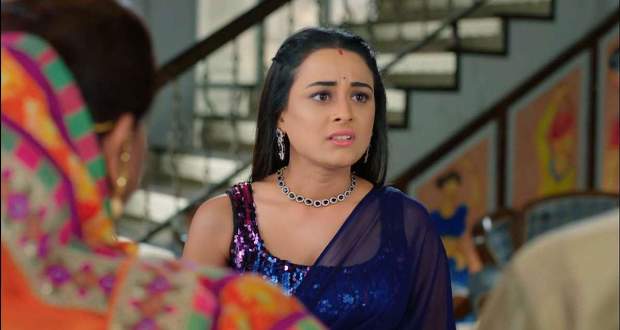 Today's Saath Nibhana Saathiya 2 7th April 2022 episode starts with Gehna chatting with Dimple. She is delighted that Surya cared for her well-being. Dimple encourages her to expose Suhani.

In the parlour, Suhani is talking on the phone about exposing Gehna.

Gehna's knees hurt badly but she continues with all the housework. Surya helps Gehna secretly and is constantly reminded of last night.

Kanak enjoys the sight of Gehna's suffering and comments that the house doesn't even need a TV.

Kanak reports the little love affair between Surya and Gehna to Suhani.

Outside the house, Gehna is preparing heaps of food, because Suhani wants to distribute it amongst the poor.

Sarika offers to help Gehna but she refuses any help.

Gehna slips and falls, dropping all prepared food all over the ground.

Kanak accuses Gehna of falling on purpose but she argues back with Kanak.

Suhani is furious and takes a horrible step to scare Gehna. Suhani brings a burning log of fire from outside and threatens to burn Gehna alive.

Although scared, Gehna maintains her stand and tries to yank the log away from Suhani.

In the process, Suhani accidentally sets fire to Gehna's pallu. Gehna pleads with Suhani and Kanak to extinguish the fire. Shocked to the core, neither Suhani nor Kanak can move.

Someone comes holding the blanket and saves Gehna from burning.

She is revealed to be Swara. Gehna's ferocious sister.

Suhani recognises Swara from the beauty parlour and calls security to throw Swara out.

However, Swara won't go down without fighting.

Swara whips up a deal with Suhani to keep their plan secure in exchange for 5 crore rupees.

Swara blackmails to reveal all the truth to Praful.

Once Swara takes a look at Surya, she takes a straight liking to him.

Surya tries to blackmail Swara but Suhani doesn't want to take any chance before Sikandar's release.