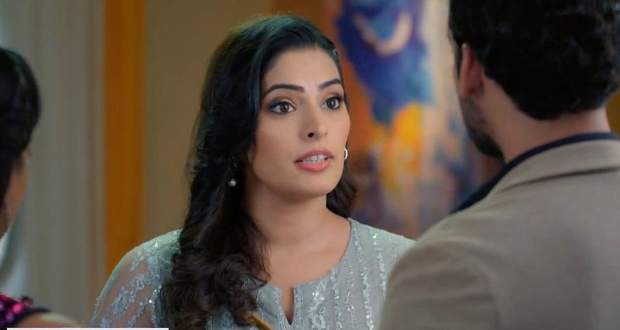 Today's Saath Nibhana Saathiya 2 7th May 2022 episode starts with Surya expressing his nervousness about the first day at the office to Gehna.

Their conversation gets cut short when Sarika knocks on their bedroom door.

Sarika offers a bowl of curd and sugar to Surya as per Suhani’s instruction.

Meanwhile, Suhani reaches the Shiva Temple at 10 AM and searches for the woman who was supposed to meet Gehna.

However, the woman who wants to meet Gehna knows Suhani and hides her face as Suhani’s gaze flickers across the people in the temple.

Back home, as Sarika offers a spoon full of curd and sugar to Surya, Gehna feels tensed.

Gehna quickly shoves the spoon in Sarika’s mouth instead of Surya’s.

Sarika bemoans as both Surya and Gehna leave shortly.

During traffic, a beggar woman asks for money from Surya and blesses the couple.

Surya thanks the lady and hopes that her blessing for him and Gehna becomes true.

Gehna is dropped off by Surya at the temple as he heads toward the office.

Gehna enters the temple and looks for the woman who dropped the orange note.

On the other hand, Surya’s driver knocks into a woman on the road accidentally.

It is the same woman who was supposed to meet Gehna.

Surya rushes to help her as the woman looks at Surya with a warm smile.

Back at home, Gehna notices Suhani trying to help Sarika scratch herself.

Shreya informs Gehna that they had mixed something in Surya’s curd as Gehna awaits Surya’s presence.

Surya arrives a second later with a guest while Gehna recognizes the woman immediately.

Upon Suhani’s presence, the woman walks out of the house hurriedly.

Gehna follows her and a confused Surya asks Suhani where the “Maa-Ji” went.