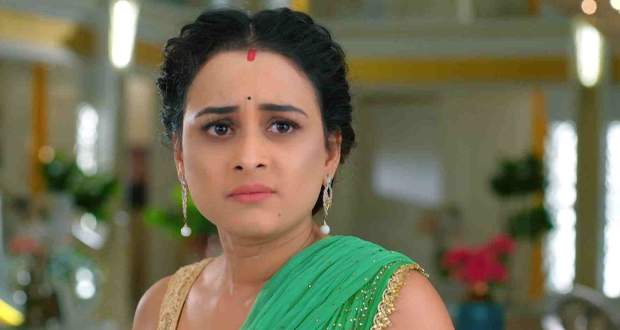 Surya is directed toward the mirror to find a birthday card reading which brings a smile to his face. Gehna steps into the room and wishes Surya a happy birthday.

The surprise isn't over yet, Gehna also has a gift of Lord Krishna's statue for Surya. Dimple walks in and wishes Surya on his birthday.

At the dinner table, Suhani shouts at Gehna for making a lot of food. Suhani asks if it's a special day today, Surya is disappointed to hear that.

Swara picks her chance and tries to get close to Surya but gets scolded instead. Surya storms off the table.

Gehna scolds Swara and warns her not to trouble Surya again. Kanak points out Suhani of Swara's intentions.

Everyone storms off the dinner table leaving all the prepared food untouched.

Dimple tries to comfort Gehna and informs her that Surya's anger is directed towards his mother and not Swara.

As Surya gets ready for office, Gehna brings him a lunch box and tries to cheer Surya up by stating that maybe Suhani has a surprise for him.

Surya enters the house to find a beautiful surprise party led by Gehna.

Mistaking the host to be Suhani, Surya calls for her frantically.

Swara oversteps a line when she grabs Surya and forces him to dance along with her.

Having had enough, Surya pushes Swara aside who clashes with Gehna who was about to fall. Surya catches Gehna in time and pulls her close.

They dance together before Suhani barges in and starts making a scene.

Gehna reminds Suhani of Surya's birthday. Suhani tries to slap Gehna but is blocked by Surya.

Surya calls the party off.

In her last desperate attempt to make Surya's birthday a success, Gehna brings him a cake.