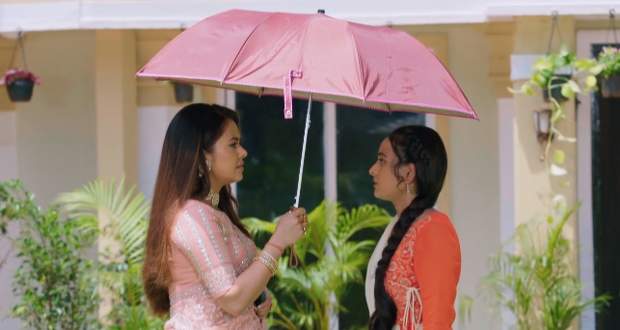 Today's Saath Nibhana Sathiya 2 19 Oct episode starts with Gopi coming out to do the Aarti. Urmila tries to eat the Laddoo while Kokila comes and stops her from eating.

Kokila asks Urmila to concentrate on the Aarti. Later, Gopi starts the Aarti while Ahem also joins her. However, Ahem doesn’t come and Gopi is just imagining him.

Kokila knows Gopi misses Ahem and reveals she also misses him. Gopi knows her Ahem is fine and wishes Happy Birthday to him wherever he is. Ahem is shown fighting Kushti somewhere in a village.

Hetal asks Gopi if she is making a cake while Kokila reveals that they have to visit her brother Praful in Surat. Urmila also wants to tag along as she doesn’t want to work and lies about visiting a relative.

Gopi receives a call from Jaggi and he tells her that he will bring some surprise. Gopi asks Kokila about her brother while Kokila gives a few details including telling her about Gehna.

Gehna is shown taking care of the family while everyone orders her around. She goes on the terrace and gets stuck with Sagar there. Sagar misbehaves with Gehna while at the same time kids fall in the swimming pool.

Gehna pushes away Sagar and rushes to save them. Gehna jumps into the swimming pool and saves the kids. She is rebuked for not taking care of the kids by Kanak.

Praful comes there while Kanak lies in front of him. Gehna is asked to change her clothes in the outhouse while Pankaj and Chetan are after their father’s money.

Meanwhile, Urmila does a little drama of her relatives being out of town. Elsewhere, Kanak asks Gehna to stay outside in the sunlight till her water gets hot. She stays outside and is about to fall unconscious while Gopi comes with an umbrella for her.

© Copyright tellybest.com, 2018, 2019, 2020. All Rights Reserved. Unauthorized use and/or duplication of this material without written permission from tellybest.com is strictly prohibited.
Cached Saved on: Thursday 26th of November 2020 10:09:59 AM