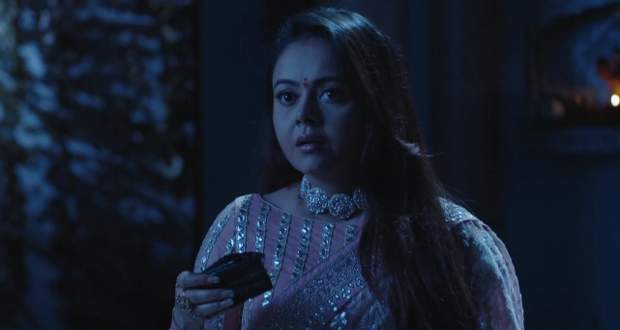 Today's Saath Nibhaana Saathiya 2 (SNS2) 20 Oct episode starts with Gopi asking Gehna about standing in the sunlight. Hema tells Kanak about the arrival of the Modi family and they are shocked to see modern Gopi.

Kokila asks Gehna firmly about her reason to stand outside while Gehna reveals the truth. Later, the Modis enter the Desai house and Kanak gives them a welcome.

Kanak is forced to perform the Aarti and decides to show Kokila her place. Praful and Kokila introduce each other to their families while Praful also tells about his youngest son Anant who will attend the function the next day.

Gopi and Kokila get emotional as they cut the cake for Ahem’s birthday. Meanwhile, Kanak sends Gehna to the outhouse while Gopi wishes to give the cake to Gehna.

She goes to the outhouse and finds Ahem there. He eats cake from her hand and leaves when Kokila enters the outhouse. Meanwhile, Kanak and Hema are worried about the entry of Gopi and Kokila.

Kokila asks Gopi who at the cake while Gopi tells Kokila that someone like Ahem came and ate the cake. Kokila gets shocked to hear this and doesn’t want to have false hopes. Gopi is imagining everything and decides to lie to Kokila.

© Copyright tellybest.com, 2018, 2019, 2020. All Rights Reserved. Unauthorized use and/or duplication of this material without written permission from tellybest.com is strictly prohibited.
Cached Saved on: Saturday 28th of November 2020 10:47:19 AM