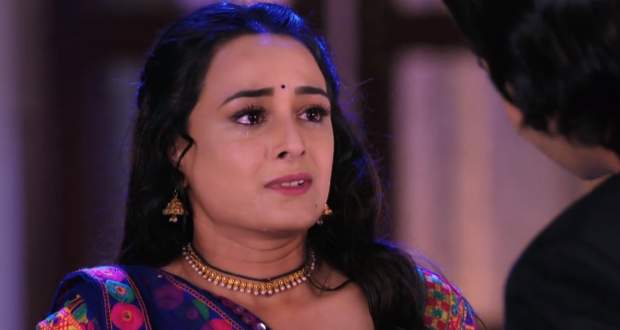 Today's Saath Nibhaana Saathiya 2 (SNS2) 23 Oct episode starts with Kokila asking about the earrings while Gehna shows her the earrings. Kanak gets angry at Hema for stealing the empty box.

Jamna and Praful are happy that Anant is coming while everyone leaves for the Jalsa. Gehna is left behind with Kanak and Hema who send her to get clothes from the terrace.

They lock her inside the house and everyone leaves for the Jalsa. Gehna witnesses them going and gets worried for Praful as his medicine is with her. Sagar comes to the house and scares her.

Kanak asks Hema and others to learn the amount of the check. Meanwhile, Sagar holds Gehna close and tries to take advantage of her. Gehna tries to break free but fails while later she pushes him away.

Sagar slips on water and falls down while Gehna takes the medicines and leaves. However, in hurt both her earrings fall off in the house. Elsewhere, Gopi aka Ahem is not able to concentrate on wrestling as he continues to think about Gopi.

Gehna rushes out of the house and runs on the road. She escapes a drunk man and later falls unconscious in front of a car. Later, Gopi gets worried for Gehna and decides to search for her.

Gopi is confronted by Gopi aka Ahem and she gets shocked to see him. Ahem is confused about why he feels attracted to her.

© Copyright tellybest.com, 2018, 2019, 2020. All Rights Reserved. Unauthorized use and/or duplication of this material without written permission from tellybest.com is strictly prohibited.
Cached Saved on: Tuesday 1st of December 2020 11:50:42 AM