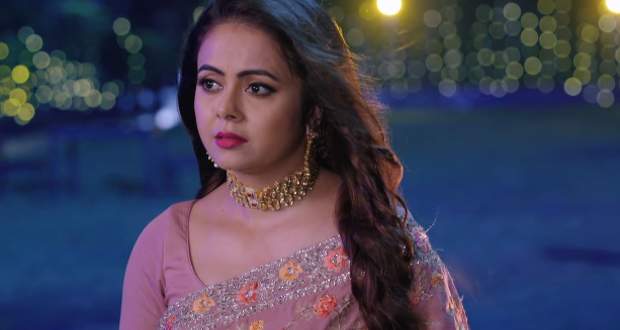 Today's Saath Nibhaana Saathiya 2 (SNS2) 24 Oct episode starts with Ahem calling Gopi from behind. Gopi approaches him but he asks her to stay away and puts a Gamchha in between them.

Gopi sees Gehna at the same time and removes the Gamchha from in between. Meanwhile, Praful is about to get the cheque when Anant brings Gehna inside in his arms.

Gehna gains conscious and Anant wants to know her identity. Pankaj says she is a maid while Kanak corrects him and says she is like a daughter of the house.

Anant appreciates her efforts and thinks she was rushing to give the money. Later, Kanak and Hema get the earrings of Gehna from Sagar and get happy.

Gopi continues to search for Ahem and wants the answers to her questions. Gehna gets worried as she can’t find the earrings.

Gopi asks Ahem to recollect her memory while Ahem again gets flashes of her memories with Gopi.

Meanwhile, Anant gives an emotional speech to his parents. Later, he surprises Praful and Jamna with a beautiful anniversary wish using firecrackers.

The other sons and daughters-in-law remember the anniversary and wish at the same time.

Gopi asks Ahem about his identity but he just wants his Gamchha back. Gopi remembers about the tattoo and tries to see it but fails.

© Copyright tellybest.com, 2018, 2019, 2020. All Rights Reserved. Unauthorized use and/or duplication of this material without written permission from tellybest.com is strictly prohibited.
Cached Saved on: Tuesday 24th of November 2020 01:14:10 AM