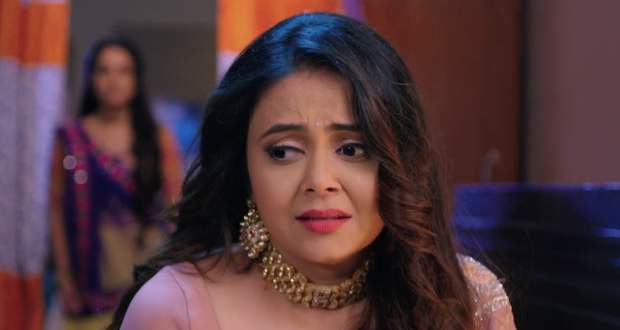 Today's Saath Nibhaana Saathiya 2 (SNS2) 28 Oct episode starts with Gopi coming into the outhouse to find some proof. She searches in the whole house while the ring she gave to Ahem sits in the cupboard.

Kokila asks Gehna why she is on the ground while Anant also asks Kanak about the same. Gehna lies that she herself offered to remove Kanak’s sandals as she has pain.

Jamna asks her son Pankaj to go to a good doctor while Praful offers to pay as well. Everyone goes inside while Kanak splashes mud on Gehna’s face.

She makes her remove the sandal and also asks her to know her limits. Kanak also suggests that she has done a favor by sending her earrings in the cake.

Later, Gehna brings the Aarti which was told by Jamna and fulfills her responsibility. Meanwhile, Gopi realizes that Ahem aka Gopi Kaka has left but is unable to see the ring.

Gehna asks Gopi about her reason for crying while Gopi wants to know about the person who stays with her. Gehna reveals that he is her Gopi Kaka.

She tells the story that she found Gopi Kaka in the river and he doesn’t remember anything. Gopi asks if she found him five years ago while Gehna says she actually found him 5 years back.

Gopi realizes that he is Ahem and asks Gehna to make her meet him. Gehna reveals that Gopi Kaka goes to the wrestling ground every Tuesday and he will be there.

Anant gets happy to see his room while Jamna says Gehna decorated it. Elsewhere, Kokila asks Gopi about her strange behavior while Gopi lies to her.

Kokila asks Gopi to never keep anything inside and share her problems with her. Gopi decides to confirm first and then tells Kokila. Gopi learns that Jaggi is also coming the next day.

© Copyright tellybest.com, 2018, 2019, 2020. All Rights Reserved. Unauthorized use and/or duplication of this material without written permission from tellybest.com is strictly prohibited.
Cached Saved on: Wednesday 2nd of December 2020 04:53:18 AM