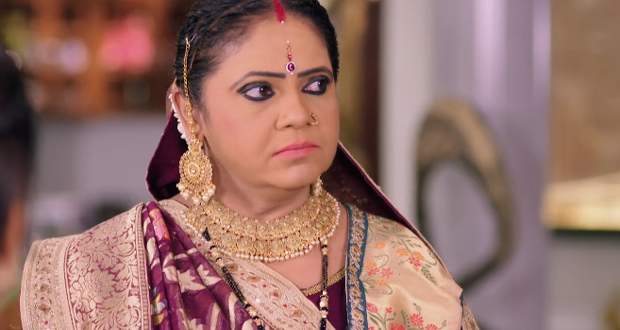 Today's Saath Nibhaana Saathiya 2 (SNS2) 30 Oct episode starts with Kokila shouting about Prasad getting spoiled. She asks who made the Prasad and also what all she added.

Gehna accidentally says yes to the egg but later refuses. Gopi takes Gehna’s side and states she was with her when all ingredients were added.

Kokila asks who entered the kitchen when Gehna and Gopi left. Further, Kokila wishes to find the truth and asks everyone to stand in a line.

Ahem aka Gopi Kaka can’t stop thinking about Gopi while his Guru asks about his worried state. Meanwhile, Kanak refuses to stand in the queue while Kokila gets upset.

Kokila points out that Gehna works most in the family and still she is blamed. She wants Kanak to treat her like a mother-in-law while Kanak is sure Gehna will be trapped.

Kokila gives one last chance and later asks them to stand in a queue. Meanwhile, Gopi Kaka aka Ahem decides to leave the Akhada.

Kokila makes everyone stand in the queue and smells their hands. Kokila smells Gehna’s hands last and can’t smell egg on it.

Kokila smells Sagar’s hands and calls him the culprit. Sagar remembers that he tried to hold Gehna’s hand and that’s why his hand contains the smell.

There is an eggshell as well on his shirt. Kanak decides to put the blame on Sagar to save herself. She further asks Hema to apologize on Sagar’s behalf.

Upcoming Saath Nibhaana Saathiya 2 episode update: Gopi puts water on Ahem and can see the tattoo on his arm.

© Copyright tellybest.com, 2018, 2019, 2020. All Rights Reserved. Unauthorized use and/or duplication of this material without written permission from tellybest.com is strictly prohibited.
Cached Saved on: Saturday 28th of November 2020 10:40:51 AM